A Rough Road Ahead for Pankaja Munde, feels Ganesha… 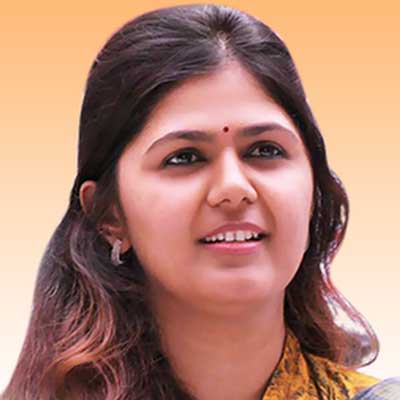 Born to the illustrious Gopinath Munde (late)- who was a former Cabinet Minister and to Pradnya Munde, Pankaja Munde has had a rich political background even from her young days. Born on 26 July, 1979, she has done her graduation and holds an MBA. She is also the niece of Late Pramod Mahajan and the cousin of Rahul Mahajan. She served as the State President of BJP’s youth wing Bhartiya Janata Yuva Morcha(BJYM) and she was elected to the Legislative Assembly of Maharashtra from Parli constituency in 2009. After taking oath as Maharashtra Cabinet Minister on 31st October 2014, she was allotted Ministry of Rural Development, Women & Child welfare and Water Conservation. Currently, Pankaja has got embroiled in a controversy which accuses her of being a part of a 206 crore Rs. Scam. Ganesha takes a look at her stars and predicts whether she will be able to get out of this tricky situation soon. Read on to find more….

Pankaja Munde’s details are based on Solar Horoscope (Surya Kundli ) with the help of Birth date and place, as the Birth time is not available.
Astrological Observation:-

Ganesha wishes a great time ahead to Pankaja Munde and hopes that she comes out in the clear due to God’s grace.