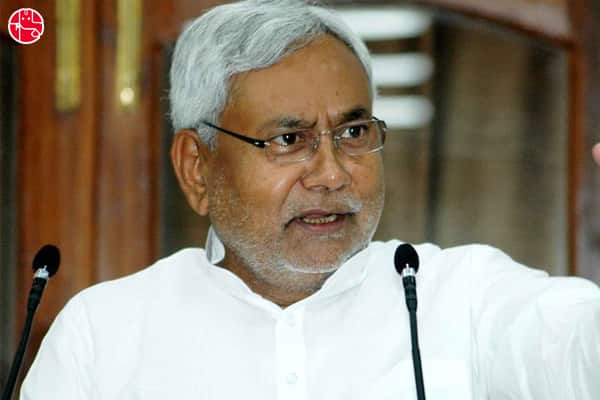 (Image Source: Internet)
Bihar Chief Minister Nitish Kumar's decision to part ways with Lalu Prasad Yadav-led RJD and join hands with the Bharatiya Janta Party (BJP) has surprised many. The political India is still speculating about this shocker and political pundits are busy measuring the implications of his action on Bihar and the national politics.  Meanwhile, Ganesha has analysed Nitish Kumar's horoscope astrologically to find out Nitish Kumar's future. It has come out from the analysis that in the time to come he will forcefully pursue his development agenda and strengthen his position in Bihar even as he will face some challenges within the party.  Read on to find more about the  future of Nitish Kumar:
Nitish Kumar
Date of Birth: March 1, 1951
Birth Time: 1.20 pm
Place of Birth: Bakhtiarpur, Bihar, India 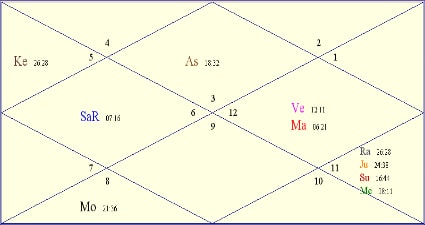 Rajyoga Has Made Nitish Kumar A Hard Working And Assertive Leader

In the horoscope of Nitish Kumar, a strong Rajyoga is formed by the exchange between 9th house Lord Saturn and 4th House Lord Mercury. This is a good planetary position which has guided his behaviour and character. This planetary position has made Nitish Kumar ambitious, disciplined and a hard working leader who prefers to express his views and policies strongly. He is also very determined and possesses a sound character because of the planetary combinations. Nitish Kumar is also a leader who wants to lead from the front. Some of us are born leaders who always want to lead, whether its politics or business. Ultimately we want success in our profession. Do you want your business to grow? We have the means for you. Get the Free 2017 Business Report, know your future, surge ahead in business.

Besides, Ganesha has found astrological reasons for his charisma and super abilities. Nitish Kumar has exalted Venus placed with the Mars. This makes him charismatic, dynamic and a leader who is able to connect himself with the masses. This is the precise reason for his mass popularity in his state and beyond.  Besides, in Nitish Kumar's horoscope, Sun is placed in the 9th house along with Jupiter, Mercury and Rahu in Aquarius. This has made Nitish Kumar a very efficient administrator and shrewd politician. At the same time, he is choosy about people and sometimes may be reckoned as an opportunist.

Nitish Kumar is currently under the influence Rahu Mahadasha and Saturn Bhukti. Rahu is placed in the 10th house with Lord Jupiter and Sun. Jupiter is the Lord of the 7th house (house of partnerships and alliances). Nitish Kumar entered into an alliance with the RJD during this Bhukti. This development made him regain power in Bihar. However, there are also some afflictions. These afflictions have not allowed him to settle down in the 'Mahagathbandhan'. This led to Nitish Kumar's leaving the grand alliance and coming together with BJP.

Nitish Kumar Will Now Strengthen His Position In Bihar Politics

Nitish Kumar is still under the influence of Saturn Bhukti and Saturn is concerned with Rajyoga. He is likely to strengthen his position in Bihar politics in the current phase. At the same time, Nitish Kumar is also under the influence of Saade Sati. Thus, the remaining part of his tenure as CM will remain challenging. There may be some confusion within the party. He will have to manage and tackle the situation.

Nitish Kumar Will Bring About Good Governance And Development

Nitish Kumar's oath taking chart shows Venus is in the 10th house. Besides, Jupiter is placed in the Ascendant. Both these astrological factors will exert a good influence on the tenure of Nitish Kumar from now onwards. It will boost his political status. He will be able to deliver his promises on good administration and governance. He is going to do well as CM after this development. His image as Sushasan Babu will stay and grow. During his regime, Bihar is likely to see improvements in infrastructure, education and health sectors. Nitish Kumar will also work for the welfare of women and the poor classes. He will also drive big financial and economic growth for the state. Nitish Kumar's political career is likely to see an upward trend. But do you want to know anything about your career? Buy Career Ask A Question Report  and know your future.

He Will Do Well Despite Some Hurdles

On the other hand,  Mercury, Lord of the 10th House in the chart of his oath taking ceremony, is placed with Moon and Rahu in the 12 House which will get him involved in various controversies. This is not a very good development for Nitish Kumar. He may face some obstructions in his regime, coming mainly from the emerging issues within his party. Nitish Kumar may face serious difficulties while trying to retain balance and decorum within his party and cabinet. Maintaining and improving the law and order situation in the state may become a serious headache. Ganesha predicts that the period till the end of October 2017 will remain shaky. Nitish Kumar may again face some difficulties and challenges between October 2018 and November 2018. Ultimately,  the positive steps which he takes during his tenure will be appreciated by the people. Even though he may face some challenges and obstructions during his tenure, on the whole, Nitish Kumar will do well and strengthen his position in the state.
With Ganesha's Grace,
Tanmay K.Thakar
The GaneshaSpeaks.com Team
For Instant Solutions! Talk To Astrologer Now.
Share