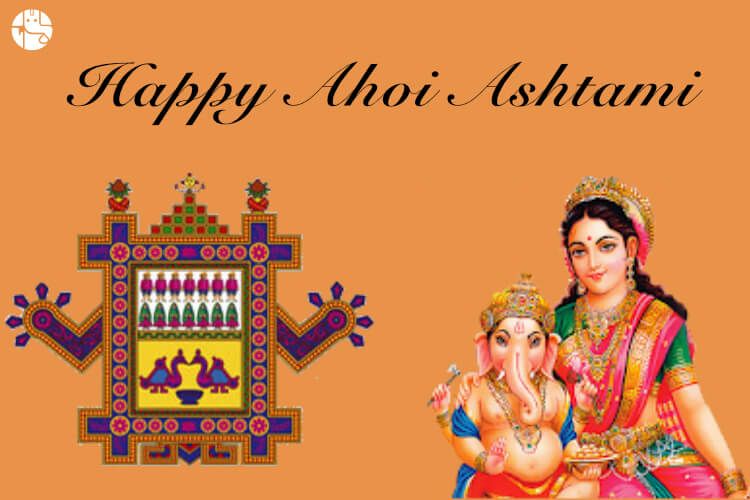 History Of Ahoi Ashtami – Blessings For The Progeny

There once lived in a village near a dense forest, a kind, devoted woman who had 7 children. The woman planned to renovate her house in the month of Kartik, just a few days before the Diwali festivities. She went to the forest to get some soil to repair her house. While digging the ground, she accidentally killed a lion cub with her spade. She was greatly distressed and guilty for what happened to the poor cub.

Within a year, all her seven children disappeared without a trace. It was assumed by her and the villagers that they had been killed by some wild animals. The woman was very sad and blamed her killing of the cub for her misfortune. She related her woes to the wise old ladies of the village who suggested that she should pray to the Goddess Ahoi Bhagwati, the incarnation of Goddess Parvati, by sketching the face of the cub she had killed. She was also advised to observe fast and perform puja to the Goddess for the atonement of her sin. According to the ahoi mata katha, the Goddess Ahoi was known to be the protector of the offsprings.

The woman chose the day of Ahoi Ashtami to worship Goddess Ahoi. When Ashtam’s day came, the lady drew the cub’s face and observed Ahoi Mata vrat and also performed Ahoi Puja. She sincerely repented for her sin, and her integrity and loyalty appealed to Goddess Ahoi, who then appeared before her and gave her the boon of her sons’ long lives. Soon after that, all her seven sons came back home alive. Since then, the tradition of ahoi ashtami has been carried through every year on the day of Kartik Krishna Ashtami, worshipping Goddess Ahoi Bhagawati. Mothers relate Ahoi Vrat katha, pray and fast on this day for their children’s well-being.

On the fasting day, women should take the pledge, named Sankalp, that they keep fast for their kids’ well-being after taking their morning baths. In Sankalp, it is recited that fasting is without food or water and that after viewing the stars or the moon, the fast is broken in accordance with its traditional family life.

Ahoi Ashtami vrat is a lot like the Karwa Chauth fast, which women keep on the Chaturthi tithi of Kartik month for the long life of their husbands. Karwa Chauth is more popular among people in North India as it marks the beginning of the festival of Diwali.

Ahoi Vrat falls between Diwali and Karwa Chauth, that is, approximately eight days before Diwali Puja and four days after Karwa Chauth. As the Ahoi Ashtami vrat vidhi is done during Ashtami tithi, which is the eighth day of the month, it is also called Ahoi Aathe.

Which Puja is the right one for you? Consult an Astrologer today!

Ahoi Ashtami is a very strict fasting day, just like the karwa Chauth. On this day, too, the women abstain from both food and water throughout the day.

The well being of progeny is important for every parent. Ahoi Ashtami vrat is symbolic of the long life and happiness of the children. This fast is observed by women who wish to have children and the mothers who wish well for their children. In many places, you can still find pictures of Ahoi mata on the walls of the houses.