Irritatingly funny and annoyingly loveable, our beloved Bharat Bhushan (Vinay Pathak) is back with Bheja Fry 2! The first part of 'Bheja Fry', which released in the summer of 2007 was a big hit, and the original idiot, Bharat Bhushan successfully carved a special place for himself in our bheja. This time, director Sagar Ballary, Kay Kay Menon, Amol Gupte and Minissha Lamba are assisting Vinay on his mission to cook up a tantalizing, delicious recipe  Bheja Fry 2. As we all know, Bharat's sole dream in life is to become a singer. To fulfil this dream, he participates in a reality game show and hopes to win the cash prize so that he can make his own music album. And to his delight, he not only wins the competition but is also gifted with a free, luxurious cruise. Now what happens on board is something all of us are looking forward to! Spiced up with good actors, marinated with comedy, and garnished with emotional drama, Bheja Fry 2 will be ready to be served on 17th June, 2011. Will Bheja Fry 2 cater to the taste of the audience? Will the viewers savour its taste for a long time, like they did for Bheja Fry? Ganesha finds out with the help of Vedic astrology. Release Date:- 17th June 2011 'Bheja Fry 2' Release time chart for Bollywood territory 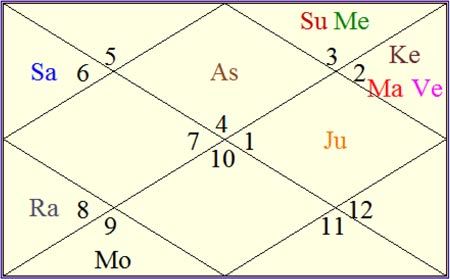 Good luck and may Lord Ganesha bless the cast and crew of Bheja Fry 2. Ganesha's Grace, The GaneshaSpeaks Team