Raees Vs. Kaabil Clash: SRK May Emerge As The More 'Raees' One In This Battle Of The 'Kaabil' - GaneshaSpeaks
https://www.ganeshaspeaks.com

Raees Vs. Kaabil Clash: SRK May Emerge As The More ‘Raees’ One In This Battle Of The ‘Kaabil’ 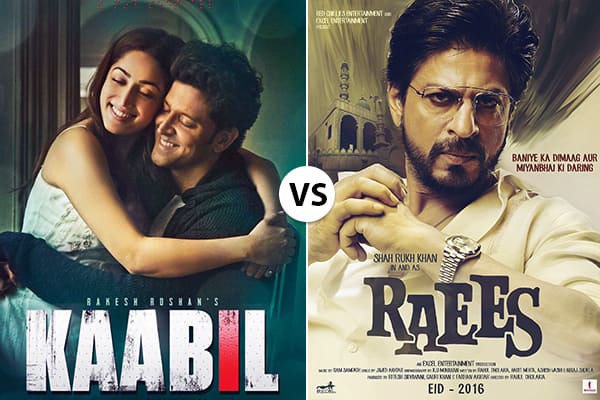 One of 2017’s grandest Bollywood clashes is just about to take place and it promises to be a high-voltage drama. Yes, Raees and Kaabil are going to release on the same day and thus the film circuit seems to be quite electrified about because of this. There’s a lot of buzz in the media as well amongst the film buffs. In the midst of this excitement, Ganesha presents some interesting observations and predicts that camp SRK will be getting stronger support of the stars. Read on explore more about both the films’ fortunes.

Both the films will be releasing with Aquarius Ascendant and Venus – which happens to be the Yogakaraka, will be placed in the Ascendant. Saturn will be in the 10th House of success. Moon and Mercury will be positioned in the 11th House of gains.

In view of the same, both films are going to do well at box office. However, due to the placement of Rahu in the 7th house, both the films will face tough competition, says Ganesha.

The Numerology Angle:
*Ganesha notes that the name ‘Raees’ totals to 21, that is 3 as per Pythagorean Numerology. But, as per Chaldean Numerology, the title totals to 16, which equals to 7.

*On the other hand, ‘Kaabil’ totals to 18, which ultimately sums up to 9 as per Pythagorean Numerology. As per Chaldean Numerology it totals to 10 = 1.
*The release date is 25th January, 2017, so the birth number is 7 and destiny number would be 9.

How will Raees perform at the Box-Office?

Raees is likely to do well at box office, says Ganesha. Its business in India will be very good. However, due to competition as indicated in the release time chart, the chances of extraordinary business are less likely.

Will SRK be able to woo the audiences with his killer charm?

Shah Rukh’s date of birth is 2-11-1965 2nd November, 1965. This totals to 7. Movie will be releasing on the date – 25, so the total is 7. In view of the same, Ganesha feels that SRK will be able to maintain his charm. His performance in this movie will be appreciated as luck is supporting him.

Also Read: Deepika Will Be The Sure-shot Head-turner of 2017, Predicts Ganesha

Will the film face more controversies?

It may face controversies even post release, as Rahu is placed in the 7th House of public image. Moreover, some elements of the movie may not go down well with some sections of the society. Rahu in the 7th House and the aspect of Saturn over Natal Sun indicates some political angle also coming into the picture.

What do the planets indicate about Kaabil’s prospects?
Ganesha feels that Kaabil will be able to do good business at the Box-Office, but it may lack the spark to entice the audiences. Considering the various factors, it can be said that will go on to become a good one-time watch.

Also Read: Rahman May Spring Various Surprises In the Year Ahead, Feels Ganesha

Will Hrithik be able ‘Kaabil’ enough to dazzle in this one?

Transiting Venus’s position over Hrithik’s natal chart indicates that his performance in this movie will be appreciated. He will be appreciated by the audience. He will be able to maintain his charm. Audience and critics both will appreciate him.
Considering the favourable transit of Venus in connection with the Natal planets, it is quite likely that the audience will sit up and take notice of the power of Hrithik – the performer. Audiences and the critics may laud the performance of the star quite magnanimously.

The story may lack the punch?
Though the performance of the lead pair may be good, it is likely that the story may seem weak in some parts.

Do not miss: While B’wood May Witness A Rise Of Regional Cinema, New Talent Will Shine In H’wood

Raees Vs. Kaabil: The conclusion

Weighing all the factors, Ganesha feels that both the films are likely to do well and will not fizzle out prematurely. As already mentioned, the presence of Rahu in the 7th House indicates that it will indeed be a fierce clash. But, Raees may go on to achieve higher success and will do better business. This is because Chaldean total of the film’s title is matching the birth number on the day of release. Kaabil, though would be a very good movie, may remain behind by marginal difference from Raees, feels Ganesha.