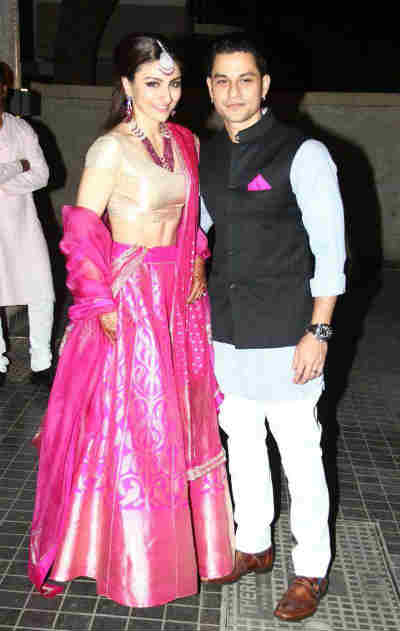 The latest hot news in Bollywood is that actors Soha Ali Khan and Kunal Khemu recently got engaged in Paris, after the latter proposed to the Rang De Basanti star. Soha has since confirmed the news saying that Kunal presented her a very beautiful ring. Sharmila Tagore and Sai Ali Khan (Soha’s mother and brother) have pitched in with their wholehearted support for the duo. Even Kunal’s father Ravi Khemu has lent his support to the marriage saying he would bless them, so now the wedding is definitely on. Kunal debuted as a child actor in the 1990s, and is famous for his films Kalyug, Traffic Signal, Golmaal 3 and Go Goa Gone. On the other hand, Soha has churned out hits like Rang De Basanti, Saheb Biwi Aur Gangster Returns and Mumbai Meri Jaan.

Ganesha, with the help of Vedic Astrology, analyses the fortunes of Soha Ali Khan (actress) and Kunal Khemu (actor).
Ganesha observes that in Soha Ali Khan’s Chart, Venus the significator of love is placed with Mars in Libra Sign. Libra is the universal Zodiac’s seventh Sign, indicating partnership and related matters. As per Ganesha’s view, this factor strongly indicates chances of a love marriage in Soha’s Chart. In Kunal’s Chart, retrograde Saturn is placed in Libra plus Venus and Rahu are in Gemini. Both the factors are indicating that his life partner will be either mature (older) than him in age or may appear mature as compared to him.

If at all Soha and Kunal marry each other, will their relationship last and be a success?
In a Horoscope, Venus signifies love and related matters. Though love relationship between both looks intense, they will be still facing challenges at marital front because Kunal’s Venus is afflicted by Rahu. Soha’s Venus is connected with Mars, so because her love is very intense, she will expect the same intensity from her beau. There will be differences between both of them that they will try to manage nicely but they will have to handle the relationship delicately till their marriage ‘matures’. It may take sometime to adjust with each other, feels Ganesha.

In general: What’s in store for this relationship?
Ganesha notes that Kunal’s retrograde Saturn falls on Soha’s Venus and Mars. This factor is very important in this relationship. Post marriage, Soha may at times feel that Kunal is restricting her expression of love or is unable to inspire her to express herself freely in matters of love. Kunal is born with Venus and Rahu in Gemini so he can be very moody when it comes to love. Post marriage, both of them will have to try harder to understand each other’s moods and that will help them a great deal. Best part is – there is the Trine aspect between Venus in Kunal and Soha’s Horoscopes (Gemini – Libra Trine). This factor indicates that if they work a little harder on the relationship, they will be able to strike a balance between their expressions of love and love life, more easily. In case of Square or In-conjunct aspects between Venus and Venus in couple’s Horoscopes, it is generally difficult. So that way the couple is quite lucky in this matter.

Soha is born with exalted Jupiter so she would be able to guide Kunal well in many matters. At the same time, Kunal is born with retrograde Jupiter in Scorpio so he would be unconventional in his way of thinking. As he is born with Moon Saturn conjunction, may take time to digest certain things.

If this marriage materialises – How will it impact their individual careers post marriage?
Their career as film actor and actress is going to get a boost. However, Ganesha feels that Soha is likely to become more choosy/ selective in case of her roles post marriage. Kunal will have to work harder in order to succeed as an actor even after marriage.