Tough times are far from over for Microsoft, says Ganesha

Founded by Bill Gates and Paul Allen in 1975, Microsoft was incorporated in the state of Washington on June 25, 1981, reincorporated in the state of Delaware on September 19, 1986, and then again reincorporated in the state of Washington on November 1, 1993. Microsoft has been a giant in the software and computer programming industry that brought revolution in terms of technology and advancement. As far as market capitalisation, revenue, growth and cultural impact are concerned, it is ranked third in the list of most successful startup companies of all time.
However, the recent past has not been as glorious. Although it is still one the most preferred operating systems, Microsoft seems to be losing its magic touch. And the rise of its competitors has added to the woes. It won’t be an exaggeration to say that things have not been going very much in favour of this highly valued brands. No wonder people have high hopes from Satya Nadella, the new CEO of Microsoft. But the question is, why is a company as strong as Miscrosoft struggling to maintain its market share? Are the stars hinting at something? Ganesha finds out. 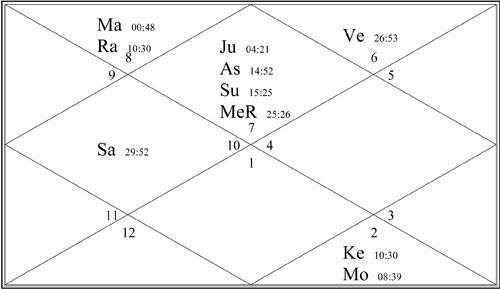 Astro Analysis
The company got reincorporated in the state of Washington on November 1, 1993. In the Surya Kundali (prepared basis the aforementioned date), Jupiter, Saturn and retrograde Mercury are posited in the Ascendant, whereas Mars-Rahu are placed in the Finance House. Ganesha also notes that Swagruhi Saturn is in the House of Satisfaction and Moon-Ketu are posited in the 8th House. In the Surya Kundali of Microsoft, Mars, Saturn and Moon are favourably placed, but Sun and Venus are negatively posited. While there are positive planetary alignments, there are negative planets in conjunction in the Surya Kundali of Microsoft. In view of the same, Ganesha says that whenever the positive planets get stronger, their combined effect is quite profound. But even a company as big as Microsoft loses its sheen every time the negative planets become more powerful and create unfavourable planetary combinations.

What next?
Talking about the current planetary transits, Ganesha says that Microsoft is going through a tough period at the moment. The challenges can be attributed to two negative planets transiting over Jupiter- debilitated Sun and retrograde Mercury. These transits have been going on for quite some time now, and therefore, the performance of the company has gone visibly down. Ganesha foretells that the rough patch will continue till July 2014. The ongoing transit of Rahu will be in progress till 13/07/2014, and Saturn will continue its transit till 02/11/2014. Post 13th July, Rahu will be transiting over Natal Venus, and after 2nd November, Saturn will be transiting through the Finance House over Mars and Rahu. These transits will keep the inflow of challenges alive, predicts Ganesha. After 20/06/2014, Jupiter will be in Cancer, bringing some major changes in the organisation. Although Microsoft has appointed a new CEO, the company is far from witnessing desired growth and progress, as the planetary positions are not going to turn in its favour, at least in the near future. The company will need to give the new CEO some time to settle down in the role and bring back the glorious days. According to Ganesha, the long-term positive changes will take place only in the last quarter of 2014, and till then Microsoft will have no other option but to face the challenges. The tough time is not yet over!