For the quarter that ended on 31st March 2013, HDIL registered a consolidated net loss of Rs 279.95 crores, compared to the profit of Rs 279.95 crores in the corresponding previous period. Besides, there has been a dip in the prices of its shares. Ganesha analyses the planetary positions in the company’s Kundali and finds out what is in store for the HDIL in the near future. Read Ganesha’s astro analysis and make wise decisions, as far as your investment in the HDIL’s shares are concerned. 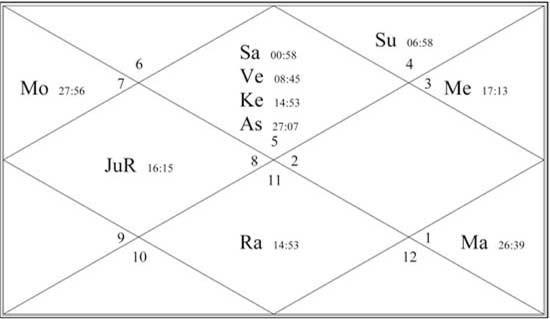 Astro Analysis :
Ganesha observes that HDIL has a Leo rising horoscope. Besides, benefic Jupiter is passing over natal Mercury through the 11th house of gains which is also aspecting the 5th House of Speculations. This factor may boost the prices of the Company’s shares. However, the malefic transit of Rahu and Saturn over natal Moon may not keep the share prices high for a long period. Hence, Ganesha suggests you to book your profit without waiting for a chance to make huge gains.

What next :
Ganesha analyses the planetary positions and makes teh following interesting observations –