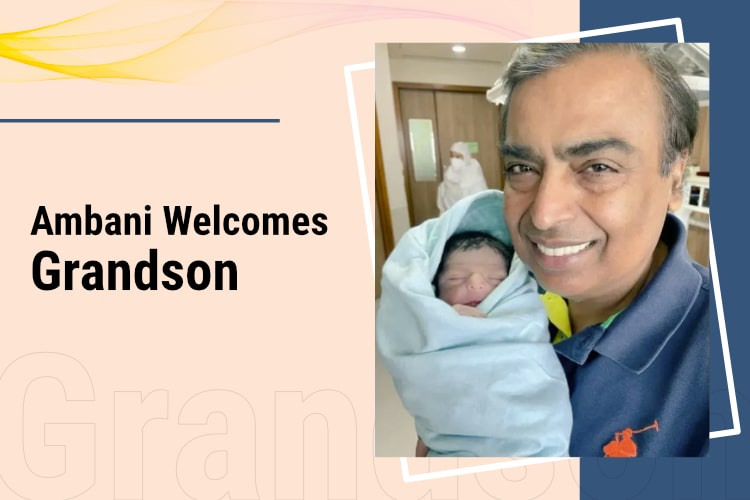 A new addition to the Ambani empire, heir to Ambani’s will, and a new businessman-to-be in town, Prithvi Ambani, made a grand entry on social media. The Ambani mansion lit up with joy when India’s billionaire business mogul couple Mukesh Ambani and Nita Ambani became grandparents for the first time. A baby boy was born to the couple’s eldest son Akash and daughter-in-law Shloka Mehta on the 10th of December in Mumbai.

In 1981, Mukesh Ambani, the eldest one began to help his father Dhirubhai maintain their privately-owned company, Reliance Industries Limited. At this point, it had just extended, so it additionally managed in refining and petrochemicals.

Cut to 2020, Mukesh Ambani is the richest man in India with a net worth of 1.5 billion rupees. Being the largest shareholder of Reliance Industries Ltd, Mukesh Ambani has reached an epitome of success in India and internationally.

Now, can his grandson live up to his top billing? Find out what the stars have to say about Prithvi, the youngest Ambani.

All Smiles to Mukesh-Nita Ambani

The large declaration from the Ambani family uncovered uplifting news of being grandparents for the very first time. As their son Akash and daughter-in-law Shloka welcomed a baby boy on the 10th of December in Mumbai.

With the grace of God, Mukesh Ambani and Nita Ambani became “Dada and Dadi” and are pleased to be the same. However, the emotions are similar for Shloka and Akash as they embrace parenthood.

First Pic of Ambani grandson – Trending All Over the Internet

On arrival of the newest member of the family, an image of Mukesh Ambani holding his grandson went viral around the web. Not only that, to commend the arrival of junior Ambani, the Antilia building, family home to the Ambani’s, was lit up in blue.

Soon, social media was flooded with a picture of the grandfather with the baby at the hospital. The most anticipated picture via online media was uncovered as they posted the image of the baby soon after his introduction to the world. Mukesh Ambani was seen carrying the newborn in his hands and smiling at the camera.

The Ambani family named the child Prithvi Akash Ambani. But why the name Prithvi when the previous generation have the same initial ‘A’. Well, the name doesn’t come as a surprise because Ambanis have shared a reason for this. As you know, the proud father Akash means the sky when literally translated to English. Hence, they already have Akash in the family, and now Prithvi. So the father-son duo together would mean Sky and Earth.

Know what the future holds for Prithvi Akash Ambani

As indicated by a source, Akash and Shloka Ambani’s child was conceived at 11.40 am on the 10th of December. The baby boy is brought into the world with an Aquarius ascendant in the Lagna chart. As per the Vedic horoscope analysis , Prithvi Ambani being the native of Aquarius ascendant, patience and confidence will be his prominent personalities. Also, he has a secretive personality and excellent multitasking capabilities.

Know your secretive personality traits and potential by uncovering your Free Janampatri Now!

As the Sun is in the 10th house, it is fortunate for his father. Also, the growth and progress of Akash Ambani will boost after his child’s introduction to the world.

The conjunction of Jupiter and Saturn is ground-breaking in his chart. This combination of two giants will influence Prithvi to have love for accomplishing noble causes. Also, he will consistently do great for other people. As you know, Rahu is in the fourth house of his kundli. The placement of this shadow planet here shows all the extravagance and joy in his life. However, the planet of love and beauty, Venus is in the ninth house. Its influence will make Prithvi extremely fortunate and appealing. Adding to this, Venus will furnish him with all delights, luxury, and materialistic pleasures in his life.

The 10th house, which is the place of work and working environment, will give a tad of difficulties in his vocation. As we can see there is a triplet of Sun, Ketu, and Jupiter in the 10th house from the position of Moon. This shows that the individual will put resources into various business organizations in the future. The Lord of income and gain, Venus is passing through the twelfth house, which is accepted to be fortunate regarding abundance. This shows that junior Ambani will never have an absence of money.

Finally, we are giving him all the absolute best of wishes for his bright future, and may Ganesha consistently favour him and his family.