12 Zodiac Signs and Their Best Personality Traits and Qualities 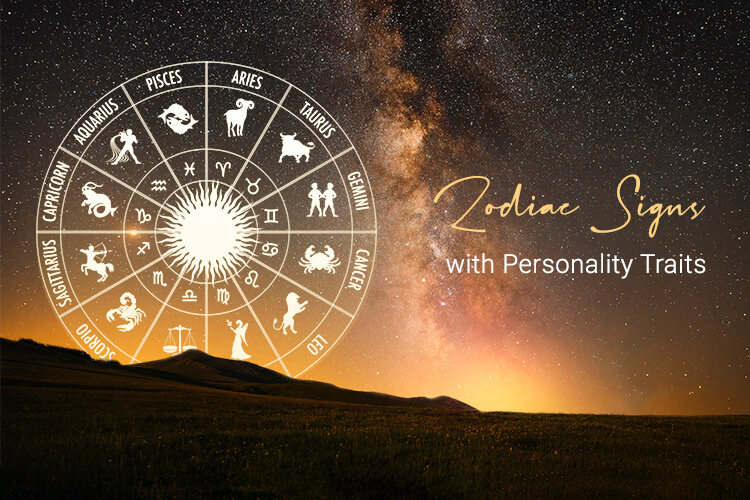 The whole subject of Astrology is classified into the 12 Zodiac signs, and one of the most common classifications is by four core elements – Fire, Earth, Air, and Water. These four elements are the primary source of life, and our existence has no value without the absence of any single element. In Astrology, these four elements are used to describe the mood and behaviour of an individual. 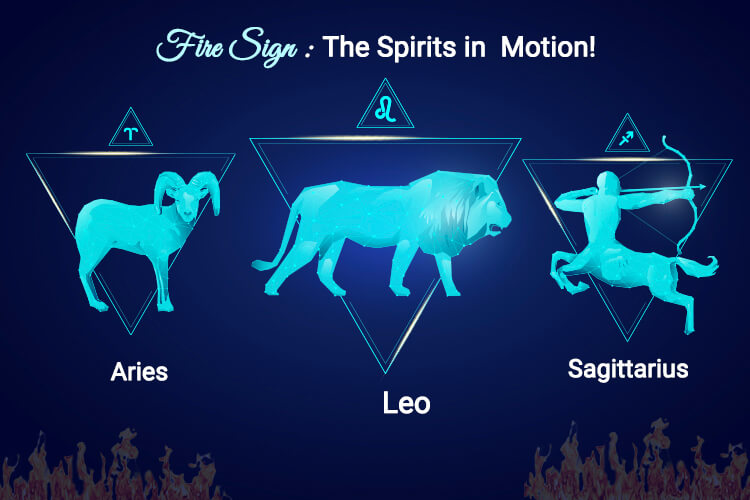 The first element of fire is associated with the signs Aries, Leo, and Sagittarius and rules the First, Fifth, and Ninth house. Those are graced with the fire sign, undeniably the fiery one. They are enthusiastic and sometimes larger than life. Just like a fire, if it is left neglected, then it can go out of control. So, it’s best to tend to them. A fire sign is also an indicator of creativity and manifests itself creatively and uniquely. Those who come under this fiery sign are lively and possess a tremendous zest for life.

According to the Zodiac signs personality traits, Aries is the sign of the feistiest clad. This rambunctious Ram is a cardinal sign, which means they are always at the fore to take charge. If you are ever known as Aries, chances are they can easily charm anyone with their powerful magnetic words and make you feel like just a speck of dust. Aries are known for their “Let’s Do It!” attitude, as well as a “one-track mind” Embracing and overcoming challenges is like a so-called activity for them. Aries are thrill-seekers and put their heart and soul when it comes to finding a destination to explore.

What sort of traveller are you? Find Now

They are the Monarch among humans, and of course, have a big ego-mind. They are ambitious, positive, strong-willed, and use all their energy and strength to get what they want. Leo always thinks bigger and acts on a large scale. If they fail, they have the tremendous ability to resurrect from the ashes like a phoenix. Leo natives are always looking to increase their aura and spend time watching stuff like how to be an excellent leader and what gyming tips should acquire.

What kind of binge-watcher are you? Check out here!

As the protector of the galaxy, the archer is the fearless soul with a powerful philosophical mind who never minces words. They are the real fighters and always fight for themselves when they believe in them. They never fear to use their passionate energy to the quest for the real truth. They are adaptable and don’t have the habit of putting their foot into the mouth. They are prone to adventure, and when it comes to it, they become restless. They are always in search of the next big adventure.

So, which adventurous place suits your mood? Find out now!

Water: A Wave of Emotion! 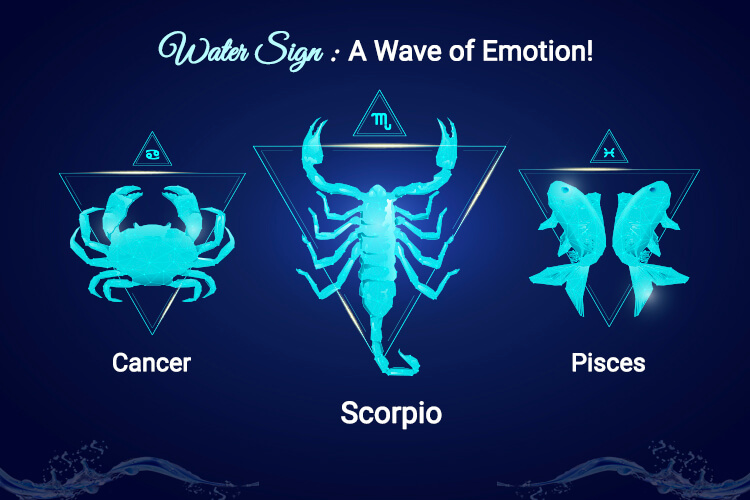 Of all the zodiac signs, water is the only sign that is the enigmatic and cooling counterpart. It can easily quench the fiery fire. The water element represents the realm of deep emotion and has a compulsive passion to overcome fear. Those who come under this sign are highly imaginative and do wonders in an artistic profession. They are very loyal and compassionate.

According to the Zodiac signs personality traits, Cancer is a cardinal sign, and its ability to crawl between the ocean and the shore makes them the leader of both emotion and the material world. Cancer is a very sensitive sign and thus has all sorts of thoughts and feelings going on upscale. They are often introverted and thus make a hard shell to break. They are foodies and spend much of their time watching mouth-watering stuff on the internet

What stuff makes you browse the internet? Check out

According to the Zodiac signs personality traits, Scorpio is the only fixed water sign, but their hard exterior and fiercely independent nature, often mistaken them for a fire sign. They are very intuitive as well as observant and pick up on the truth quotes hastily. However, they are mostly known for being highly sexual and effortlessly seductive. Their emotions run hot and high, making them unable to turn off their feelings. They are explorers and rarely like to be in hotels while on tour.

Do you like to explore, or be in one place and relish it? Find out.

A mutable fish and the only zodiac sign of being highly mysterious and ethereal. Mysticism and dreaminess consume the heart of tender Pisces. Those who come under this sign are compassionate, generous, and emotional nerds who would do anything to make others happy. They are highly creative and use that artistry to make the world of their own choice. Pisces love impactful content that helps them gain knowledge.

What content do you love to watch? Check out!

Air: Breeze Through The Life 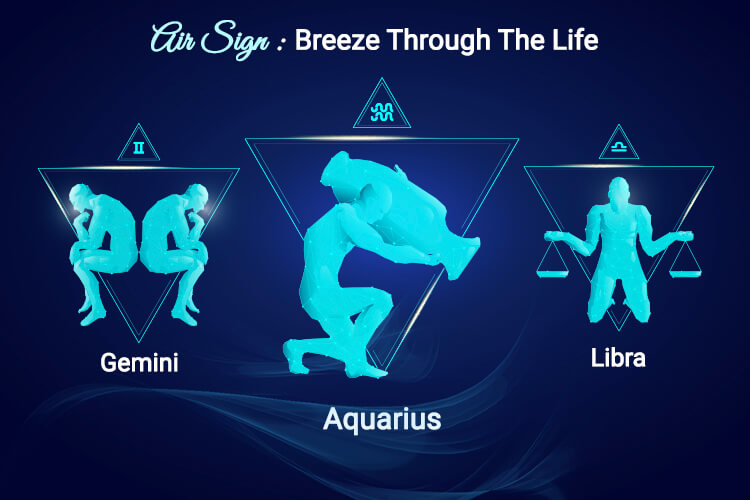 According to the Zodiac signs personality traits,Air sign is an unconscious part of existence, and without it, the ability to breathe in the air is futile. Air is the energy element that we gasp. Those who come under this sign are intellectual and place much importance on logic as well as thought. If any of these signs face any difficulty, they swiftly rationalize it and examine it from all areas rather than reacting intrinsically. And due to this reason, they are known to be great problem solvers.

Gemini is a mutable air sign, who only knows to dance and flutter from one person to another. This chatty sign can understand the situation from miles away. The twins embrace fluidity in life and exude charisma and wit wherever they go. They are creative and have an artistic vision to live in their own dream world. Gemini is also a great traveller and spends most of their time searching for a dream travel destination on the internet.

How creative are you in finding your destination? Find out with your zodiac sign.

According to the Zodiac signs personality traits, Libra is a mutable sign who flirts with such adorable ease that you can’t help but fall in love with them in truly no time. Ruled by Venus (Planet of love), such natives walk with an enticing aura that makes anyone fall in love with them. Libran is mostly known for its ability to make a fair decision, but it often takes a long time to come to an actual point. Libra is also a big fan of fashion, beauty, and music. They are considered to be social media Jam and spend most of their time watching stuff of their vogue. What stuff fascinates you and impels you to browse the internet? Find out!

According to the Zodiac signs personality traits, Aquarius is a fixed air sign that is known to be stubborn. They are humanitarian and always speak for the collective. Aquarius are extremely logical and use most of their time to learn new things. They are famous for having a unique personality that goes against the grain and stands afar from the crowd. 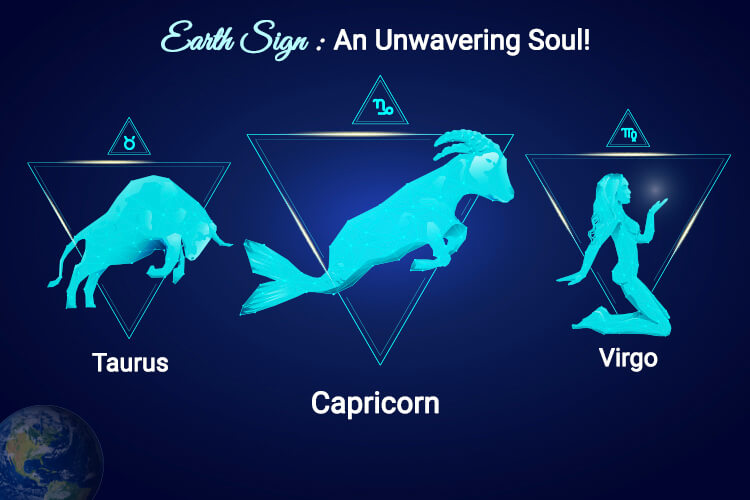 Earth signs are the most grounded peeps. This element is considered to be a building block of Nature. To this sign, creation is a tangible proposition whether it’s a job or home. and creating a comfortable room within a home, it is all about what is solid around us. Without earth, there would be nothing to hold us up, no foundation and no support. Earth is attuned to form and matters. Those who are influenced by this sign are responsible, reliable, and extremely down-to-earth.

Taurus is a fixed sign and known for effortlessly attracting the attention of others. They exude luxury and indulgence, and with their innate beauty and sensuality, they manifest their dream. Taurus is a persistent worker and is excellent to make their desired vision possible.

According to the Zodiac signs personality traits, Virgo is a mutable sign and known for being practical and down-to-earth. They take a systematic approach towards life and always value truth and justice. They are highly intellectual and always use their fine-tune mind to decipher the information through reason. They are meticulous but overcritical, modest but a worrier, practical but conservative, intelligent but fussy.

Capricorn is an initiator and possesses a cardinal earth sign. They are workaholics and quite ambitious who fulfil their goals step by step to satisfy their lust for power and wealth. Capricorn believes in taking action and completing what has been taken in its hand.