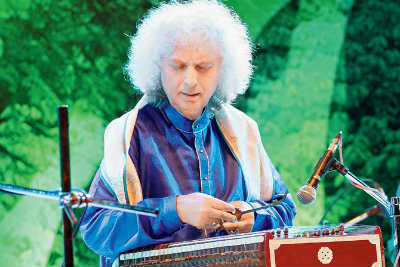 The heavenly 13-day classical music festival – Saptak, which is conducted between January 1-13 has already started in Ahmedabad and music enthusiasts from around the world will be attending it. During this festival, we shall be presenting some exclusive articles which will be discussing the highlights of the Horoscopes of various artists. Let us, through Astrology, try to get an idea of the greatness of these musicians! The first article in this series of Ganesha’s excluives will be an Astro-Profile of Pandit Shiv Kumar Sharma – the resplendant genius and the pioneer and the architect of the phenomenon called the ‘Santoor’!

Very few people in this world would be able to set their sight on something and then achieve it with absolute style and class and then make it a cult, which would be regarded highly by millions the world over! Pandit Shiv Kumar Sharma is a special name in the world of music and especially Classical Music. After in-depth reasearch, Pandit Uma Dutt Sharma had decided that his son Shiv Kumar should be the first musician to play Indian Classical Music on the Santoor. Beginning his learning journey at the tender age of five, Pandit Sharma, a Kashmiri Pandit, who hails from the state of Jammu and Kashmir, went on to become the greatest ever artist to present to the world, the novel wonder of Santoor! It is just a state of absolute bliss and musical delight when Panditji performs live! His path-breaking compositions in various ragas always make for the consistent staple for the average music lover! Pandit Shiv Kumar initially used to play the Tabla and also perform vocals, but he was probably the Destiny’s chosen one, as he could realise the higher calling and thus set out on journey which no one else could before and the rest is there for the world to see! For his immense contribution to the world of music in the form of his personal compositions as as well as innumerable live shows, concerts and programmes, Pandit Sharma has been conferred with the Padma Shri award in 1991 and the Padma Vibhushan in 2001 and is also a recipient of various other awards.

Some Highlights of the Santoor Maestro’s Horoscope:

Ganesha wishes good luck and an even brighter future to Pandit Shiv Kumar.