His public image or his publication’s image will surely be tarnished but somehow he will use his clout to find a way out of this logjam, feels
Ganesha.

Keith Rupert Murdoch, the media mogul and the Chairman and CEO of News Corporation has been listed three times in the ‘Time 100′ amongst the most influential people in the world. He was ranked 13th most powerful person in the world in the 2010 Forbes’ The World’s Most Powerful People list. Witha net wo rth of US$6.3 billion, he is ranked 117th wealthiest person in the world.

Starting from relatively humble beginnings he has expanded News Corp into the UK, US and Asian media markets. Murdoch’s first permanent foray into TV was in the US, where he created Fox Broadcasting Company in 1986. In the 2000s, he became a leading investor in satellite television, the film industry and the Internet, and purchased a respected business newspaper, The Wall Street Journal.

He has been in the centre of a media storm over phone hacking issue since the last 10 days. After a sustained public outcry and the prospect of a unanimous call by MPs to withdraw his bid, Rupert Murdoch has capitulated. He has also abandoned News Corporation’s bid for BSkyB and faces the prospect of appearing in front of a judicial public inquiry to salvage his personal reputation and the right for his company to continue broadcasting in the UK. At such a tumultuous point of his career, Ganesha tries to read his stars and foretell his future! 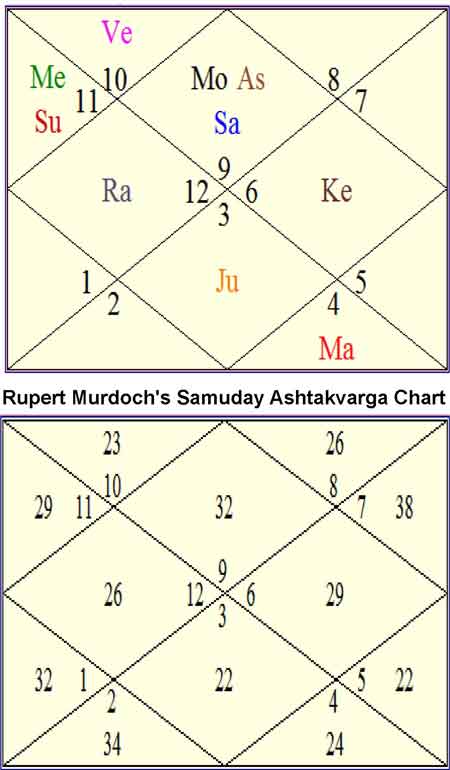 We have to get into details to understand this…

There is a also a special method in Vedic Astrology System called Ashtakavarga which can throw light on certain aspects. Following are the points derived
from Rupert Murdoch’s Sarvashtakvarga.

This was a brief conclusion drawn on the Natal promise of Murdoch’s chart.

Considering these facts, Ganesha feels that
it won’t be possible for Rupert Murdoch to come out of current adversities unscathed. This matter will continue sullying his public image during the next two to three years. He may have to pay a hefty sum as fine.

Analysis of the current transits

Jupiter is transiting through the 5th house, aspecting 9th house of luck, 11th house of gains and the Ascendant. Jupiter rules the Ascendant and 4th
house of his chart and as stated above, is creating Kendradhipati Dosha.

Owing to the above, Ganesha feels that the time ahead is going to be stressful for Murdoch mentally as well as physically. He will have to strive hard to come out of this. Especially, Saturn’s transit over Ketu can bring him down further if he doesn’t give strong fight and take necessary steps in time.

Summary
Ganesha feels that Rupert Murdoch’s empire will not fall apart due the phone hacking issue but he may have to pay a hefty penalty to resolve it. He may not beaten by it and will use his clout to find a way out of this logjam, but his image would take a major dent.

What next?
Rupert Murdoch should try very hard to remain away from controversies and adversities till mid of 2014 and take very good care of his health. Specifically so, after the beginning of his Shani Mahadasha in the mid of 2014.

Good luck and may Lord Ganesha bless Rupert Murdoch with happy times ahead.