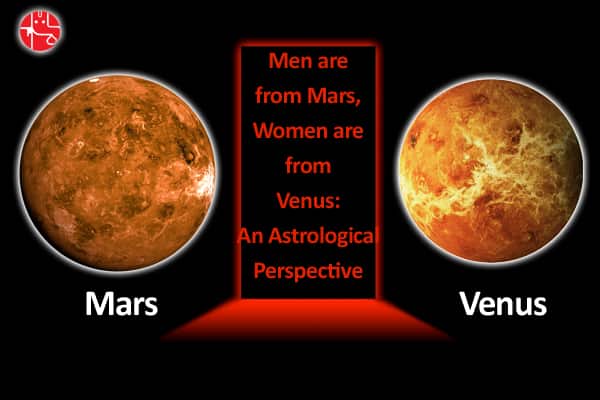 For thousands of years, men and women have complemented and supported each other. They differ in some key areas but also symbolise the two sides of the same coin. In fact, much of the world revolves around their mutual interactions. Well, we have explored an astrological perspective for the age-old saying “Men are from Mars, Women are from Venus”. Here are the findings:

Decoding The Qualities Of Mars And Venus:

As per Astrology, Mars is the planet of war and raw energy. Mars is a planet of action – assertive, direct, forthright and adventurous. On the negative side, Mars may deliver an impulsive, aggressive and dominating approach. It is said that Men are from Mars because traditionally they are aggressive, impatient and independent.

Do you want to know when you will fall in love? Get an answer from an Expert within 24 Hours.

Venus: It Represents Love And Beauty

On the other hand, Venus stands for feminine qualities. Venus is the planet of love, beauty, kindness and so on. That is the reason why women are said to be from Venus as they hold these qualities.

However, men and women are not born with Mars qualities or Venus qualities. It is the family values and cultural conditioning which make Men from Mars and Women from Venus. After all, they are the same species, but they develop varying approaches over time.

Modern Age Has Narrowed Down The Gap

In the modern era, things have changed. Men are supposed to be physically stronger and exhibit courage but nowadays women too are showing the same qualities in almost all areas.

Are you facing struggles in your career? Get accurate guidance from our Experts to make big, positive changes happen.

Differences Pave The Way For Creation

Mar’s association is with fire while Venus associates with Airy qualities. It is these extreme elements, and the passion between the two planets which paves the way for creation in the world. Without the perfect blend of Yin (female qualities) and Yang (male qualities), the world can’t move. Besides, every human being has a Mars and Venus inside.