Mars Transit In Cancer: Know How Will It Affect You 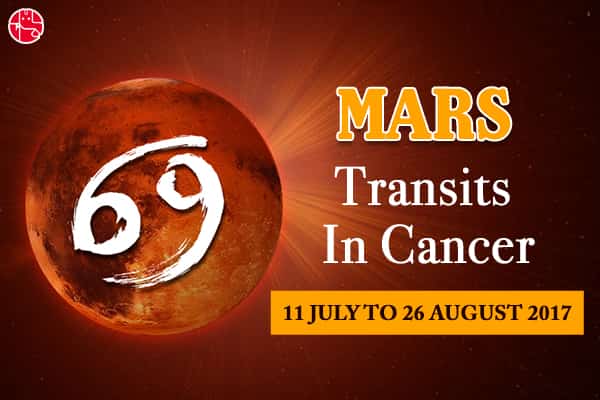 Mars Transit In Cancer: An Overview

Mars Transit in Cancer 2017 will begin on July 11 and end on August 26, 2017. This transit will have a significant influence on the natives of the 12 Moon Signs.Mars is commonly believed to be in the form of Kunja or Angarak. As per the tradition, Mars is also referred to as Dhartiputra (the son of planet Earth) as he is said to have come out from Earth. Astronomy states that Mars has got its red colour because of the large quantity of Carbon Oxides which is present on its surface. Astrology also refers to Mars as the red planet and it is said to possess the fire element. In the horoscope, Mars rules over the first and eighth signs (i.e. Aries and Scorpio respectively). In the ancient tradition, Mars was referred to as the God of War. It is considered the Commander-In-Chief in the planetary cabinet. Fiery Mars entering the watery Cancer is a significant development. Now, let us see the developments of this transit on the 12 Moon Signs-:[Please Note: The predictions are to be considered according to Moon Sign. But, some effects will also be applicable for the Ascendants. If you want to know your Ascendant/Lagna Sign, click here.]

Mars Transit In Cancer 2017 For Aries

Mars will be transiting in the fourth house for natives of Aries. It may create differences between you and your life partner. This transit may also influence your professional arena, says Ganesha. You will get more work. However, due to Jupiter, you will not get results as per your expectations. So, on the whole, Mars transit will deliver mixed results for the natives of Aries sign. Life is full of ups and downs. It also has many unsolved issues. But you can get your issues resolved. Buy the Ask Any Question Report and know the suitable answer to your perplexing question.

Mars Transit In Cancer 2017 For Taurus

Mars will be transiting in the third house for Taurus natives. Overall, the period will be beneficial to natives of Taurus sign. There is going to be an increase in the confidence and courage in the natives. Sports persons will achieve new heights in their skills. Your rivals will be vanquished. You may get some benefits from your in-law’s side. Relationships may be sweet or sour. But we have the option to change them. You can make your relationship harmonious if you avail the 2017 Personal Life & Relationship Report.

Mars Transit In Cancer 2017 For Gemini

Mars will be transiting in the second house for the natives of Gemini sign. Overall, the transit of Mars is not auspicious for Gemini natives. You may face financial problems. Issues within the family will stay on. You will have difference of opinion with somebody or the other in your family. You should drive vehicle very carefully during this period as you may meet with an accident. Life is full of uncertainties. Sometimes they take away our peace. But if you can face them better if you are cautious. Buy the 2017 Yearly Report, know your future, strengthen yourself.

Mars Transit In Cancer 2017 For Cancer

Mars will transit in the first house for Cancer natives. Overall, Mars transit will be auspicious for the natives of Cancer. The movement of Mars above the Moon may create aggression. You should not act rashly or else it may lead to conflicts in relationships. But this movement will create Lakshmi Yog between Mars and Moon. You may make sudden and unexpected financial gains. If you are into industrial business, the time is going to be specially good for you. We need to achieve the best instead of better. This is all the true in the area of finance. Get the 2017 Finance Report, boost your finances by knowing your future.

Mars Transit In Cancer 2017 For Leo

The impact of Mars transit on Leo natives is foreseen clearly. On the whole, the transit of Mars in Leo can be called not auspicious. Mars will pass through the 12th House (Expenses House). It may cause a sudden increase in expenses for the natives of Leo. You will need to be very careful while driving vehicle as there is the possibility of an accident. Those who are into service may face heated arguments with their colleagues, etc. Businesspersons may face adversities which may lead to losses. To do well in business, take the help of stars. Know your future. Buy the 2017 Business Report, boost your business prospects.

Mars Transit In Cancer 2017 For Virgo

On the whole, it can be said that Mars transit will be auspicious for the Virgo natives. Mars will transit via Virgo in the 11th house (Labh Sthan). This will lead you to financial gains. You will get the much-needed cooperation of your friends and well-wishers. Those who are pursuing Engineering or Medical studies will excel in their performance. The planetary picture supports your financial situation. But if you want to increase your financial prospects still further by knowing your future, you have the option here. You can buy the 2017 Finance Report.

Mars Transit In Cancer 2017 For Libra

Overall, Mars transit will deliver mixed results in your life. Mars will pass through the 10th house (Karma Sthan) for the natives of Libra. This movement will turn out to be auspicious for you. You will make gains in business. Those in job are likely to get promoted. As Mars will aspecting the Mother place, so you may develop differences with your mother. Your financial situation will become stronger. Finance is a sensitive area and you can’t take chances. In order to ensure growth in your financial situation, you need to know your future. You can know your future and boost your financial prospects if you buy the 2017 Finance Report.

Mars Transit In Cancer 2017 For Scorpio

Mars transit in Cancer will have significant developments for the natives of Scorpio sign. The planet will pass through the ninth house of Scorpio sign. In one way, your fortune may see an upswing during this period. You will get several good opportunities. Businesspersons may make financial gains while those who are doing job may get promotion. You may need to visit a foreign country. Those who are pursuing higher education may get success. This time will be very good for career related matters. Students need to be good in education to later succeed in career. But if there is any obstruction in your education, you can get it clarified and find the solution. You can do it with Education Ask Question: Detailed Advice Report.

Mars Transit In Cancer 2017 For Sagittarius

Mars transit in Cancer will also influence the natives of Sagittarius sign. On the whole, this Mars transit won’t be auspicious for the natives of Sagittarius sign, so you will need to be careful. Mars will transit through the eighth house in Sagittarius. It is likely that your financial planning may fail in future. You should make sound planning in advance to meet any difficult situation in future. Ganesha advises you to drive your vehicle properly or else you may suffer an accident. Issues and conflict may happen between you and your life partner. And just your life partner, you may also have conflict with other family members. Relationships are a complex web. Sometimes we find ourselves in a bad situation. If you are having problems in relationships, you can get it resolved. You can do it by buying the 2017 Personal Life & Relationship Report.

Mars Transit In Cancer 2017 For Capricorn

Mars transit in Cancer will pass through the seventh house of Capricorn. On the whole, this Mars transit will be beneficial for you. There are hardly any chances of misunderstanding between you and your partner during this phase. Ganesha sees a conjunct being formed between Mars and Moon. This will trigger positive developments in your life. The relationship with your life partner will not be harmonious. Besides, as Mars will aspect the Moon, so you won’t be in a peaceful situation. Your financial situation is likely to get strengthened. However, if you are curious in what way will your financial situation strengthen, buy 2017 Finance Report and know more.

Mars Transit In Cancer 2017 For Aquarius

Mars transit in Cancer will move through your sixth house. You will overcome your rivals by the power of Mars. Those of you who are going through a legal dispute and court proceedings will need to be very careful. There will be a sudden increase in your expenses. People connected with security agencies are likely to make progress. The sixth house is also called the House of Disease. So be careful about your health. Overall, the Mars transit will be a mixed bag for the natives of Aquarius. Stars suggest a mixed bag for you. If you have any query and you feel its solution will help you, buy Ask Any Question Report.

Mars Transit In Cancer 2017 For Pisces

Mars transit in Cancer will pass through the fifth house in the Pisces. Students who are pursuing Engineering or Medical courses will get success in their studies. Fifth house also represents problems related to the stomach. So, you are advised to stay be cautious in what you eat. Pisces natives will need to be careful during this period. Expecting mothers are advised to take extra care. You are likely to make financial gains during this period. Businesspersons will make good profits. However, if you are curious to know more details about the future of your business, you can avail the 2017 Business Report and get the information.