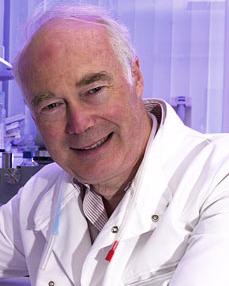 Sir Martin John Evans described his winning the Nobel Prize as a childhood dream come true. He has made some genius discoveries concerning embroyic stem cells and DNA recombination in mammals. He personally feels that his research will give way for even greater dreams. Although, Martin Evans shared the prize with other two Nobel Laureates this year, he captured the lens. Ganesha analyses his birth chart and finds the reason behind his success.

The “father” of stem cell research- a British scientist, Sir Martin John Evans was born on 1st January 1941 in Stroud which is located in England. Looking at his Sun chart, Mars is in its own sign (Swagruhi). It forces research, as it is the 8th house of research. The positive aspect of Jupiter in 8th house plays an important role of new invention. Considering this along with affiliation of Jupiter and Mars, it has been giving achievement of research. Furthermore, Venus and Mars are in Scorpio sign. This denotes good researchers and doctors in general. The house of delving is being aspected by benefic Jupiter. In the same way, Sun- the significator of fame is aspected by Jupiter which gives him long lasting power of analysis. Due to beneficial transiting Jupiter moving in favorable direction over the 8th Lord Mars, he is enjoying success and glory. Current time is gainful for him. Because of this planetary position as well as current transit, he developed ways to culture embryonic stem cells derived from the mouse blastocyst – the ball of cells formed after fertilization. Presently, the Mars is under the positive influence of transiting Jupiter. Thus he is awarded Nobel Prize for Medicine.

We wish him all the luck for the future and may Lord Ganesha bless him!