Will The Year 2018 Change The World Like Never Before? Ganesha Has The Answer - GaneshaSpeaks
https://www.ganeshaspeaks.com

Will The Year 2018 Change The World Like Never Before? Ganesha Has The Answer 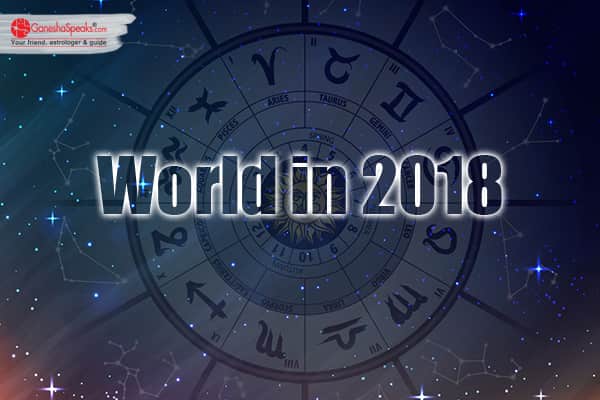 Amid Myriad Challenges, There Will Be Progressive Uprisings In 2018

The seven billion-plus population of the world will be struggling to find balance and peace amid extreme conditions all over the world during the year 2018. There will be major divides and mass movements in 2018 around politics, religion, nationality, race and gender as per World prospects in 2018. Even as the world make progressive gains, the rift between extreme wealth and dire poverty will further aggravate the situations. The transiting Jupiter could help bring the people together and heal the rifts to an extent through diplomacy and cooperation. There can be uprisings and movements of progressive ideals. As the year progresses, there are huge probabilities of confrontations among various socio-cultural or religious groups in the world. An encouragement to anti-social elements and conservative activism will be clearly seen here. World needs peace for people to progress in career and business. Are you concerned about your business growth? Buy the 2018 Business Report and see what future has in store for you in business.

As new voices for peace push for harmony, equality and collaboration, the wealthy and influential class may oppose such efforts. Powerful extremist elements will try to dominate to remain on top. People’s anger and frustration will rise as the year 2018 progresses. Political leadership will be making feel-good speeches rather than taking concrete actions. The period between May and October 2018 will be very sensitive as there are chances of explosive situations in various parts of the world. USA, Saudi Arabia, Syria, UK, India, Iraq and Afghanistan will face the heat of adverse planetary influences. The European Union will also face various internal problems. China’s move to expand its political and military influence across the world may disrupt the harmony as per China’s role in 2018. Also read about Indo-China conflict.

Immigration and refugee crisis will remain a huge issue while Saturn transits through Sagittarius throughout the year 2018. Lack of awareness, tolerance and understanding of each other’s problems will bring social unrest and turbulence. People around the world as well as the political leadership will become highly self-centred and will formulate policies to protect their own interests. In this process, new international blocks and tie-ups will emerge and redefine the entire international spectrum. Change and shakeups in international relations are likely to happen strongly during the latter half of the year 2018. You can also see Global Impact of Jupiter Transit.

New Ways To Prevent Spread Of Infectious Diseases May Be Found

During 2018, relationships will begin to find new dimensions and definitions. Different cultures and societies will seek new means of partnerships, associations and collaborations. The issue of “Gender Equality” will rise and become prominent during the year 2018. The year 2018 may bring liberal new attitudes about sex and may also bring reform in sex education programs. Motivational programs, healing techniques, Yoga will spread rapidly. New energy healing therapy could emerge. We might also see some remarkable discovery in research regarding diseases which spread through infections. All progress in world is for the benefit of people. Material prosperity is an important aspect of well being. Are you interested in knowing your financial future? If yes, get the Free 2018 Finance Report and make your finances surge.

2018 Will Mark The Beginning Of A New Era

During this year ownership and mergers of prominent business groups will hit the headlines. The real estate, financial and investments business, entertainment industry, tech companies and communication sector will witness remarkable changes in business strategies. A new era of acquisition and merger in these sectors will begin during the year. 2018 is the “Eleven-Year” which marks the beginning of new era. A new feeling of tolerance and cooperation will emerge around the world hence there will be a battle between good and evil forces. Change and innovation in technology, social, health, education as well as political spectrum will make the year very important for future developments.