Cyclone Phailin – A Dangerous Combination of Air and Water Elements

The East coast of India, especially the shores of Orissa and Andhra Pradesh, will be hit by cyclone Phailin, which the authorities estimate to be one of the worst ever cyclone that hit the Indian land. The State Governments and the Centre have been making war footing efforts to do their best to lessen the damage and so far they have evacuated more than 3 lakh people. But the destruction and wide-spread devastation will be beyond imagination, experts say.
What do the Stars say? Have planetary influences played any role in making us face one of our worst nightmares? When will have some respite from this giant calamity? Ganesha’s astrological analysis gives us some insight on this. 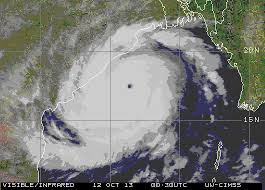 Astrological Analysis
Air and Water elements together signify cyclone. Whenever Air Signs are heavily loaded with planets, there is some problem or the other, caused by the wind. From the mundane astrological perspective wind proves to be a ‘catalyst’ when there are more number of planets in Air Signs.

If we look at the transit chart of current period, Mercury, Rahu (North Node), Saturn, Jupiter and Neptune are transiting through the Air Signs. This factor will be cause extremely chaotic situations, more so because Rahu and Jupiter both are involved here.

After checking Geocentric maps with planetary latitudes, Ganesha feels that on Eastern coast, places from Rajahamundry to Balasore are likely to get affected by to cyclone Phailin.

This is just the beginning, worst is yet to come. Total Solar eclipse on 3rd November 2013 is going to bring about some major catastrophes.

May Lord Ganesha showers His blessings!