Despite obstacles, Stuart Broad will be able to perform well, feels Ganesha. 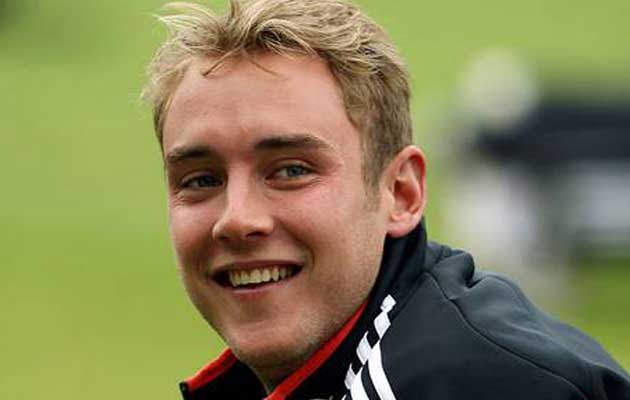 The pacer whom Yuvraj Singh despatched for six sixes in a single over in the 2007 ICC World Twenty20 Championship, Stuart Broad is today England’s T20 captain. Obviously he has come a long way since those days when he was a young lad in the initial stages of his career. That butchering didn’t break him, it just made him stronger, and today cricketers around the world swear by the pace bowler’s guts and gumption. He has excelled for England not only in T20 cricket, but also in Tests and ODIs. The highlights of his career are that he was awarded the Man of the Match in the fifth Test of the 2009 Ashes series at the Oval, after clinching figures of 5/37; in 2011 he achieved a hat-trick against India and went on to finish with figures of 6/46. As a batsman, he holds the second-highest ever Test score made by a number-9 after his 169 against Pakistan in 2010. Returning from injury in 2012, Broad produced figures of 7/72 in a match haul of 11 wickets against the West Indies. His best ICC player rankings has been number 3.

Broad celebrates his birthday on 24th June. Ganesha takes this opportunity to look at Broad’s Solar Chart to find out what the future holds for him.

Note: As the birth time of Stuart Broad is not available, the astrological observations and predictions are based on his Solar Horoscope (Surya Kundali).

Astrological Observations
1) In Stuart Broad’s Birth Chart, Gemini Ascendant and Mercury, Lord of the Ascendant are posited in the 2nd House (Finance) with Venus – a Lord of the 5th House (Performance, especially sports). Both planets are in their detrimental Sign of the Solar Chart of the player.

3) The Lord of the 7th House, Jupiter is in the House of Fortune. Rahu is in the 11th and Ketu in the 5th House of the Chart.

Current Transit of Planets :-
1) Retrograde Saturn transits through the 6th House, lending a negative aspect to the Moon in the 8th House of the Solar Chart.

2) Rahu-Ketu, the shadow planets, are transiting through the 4th and 10th Houses respectively, forming a square with the Sun and retrograde Mars.

3) The Exalted Jupiter transits over Mars and Venus, lending a positive aspect to the Moon and retrograde Saturn in the Chart.

Astrological Predicitons :-
1) Ganesha notes that Stuart Broad, despite feeling fatigued, will have to perform competitively to give his opponents a run for their money.

2) He will be able to utilise his techniques optimally.

3) His talents and inspiration may help him, but to get the desired outcome, he will have to work very hard as the transiting malefic planets are not in his favour, Ganesha feels,

4) Stuart will have to be careful about his health during the following year, or injuries could mar his performance.

5) He will be able to perform well post-July 2015, and till January 2016, since the transit of Jupiter through Leo shall give him a boost. Also, he will be able to maintain a good rapport with teammates, as well as people in his social life.

6) After January 2016, when Rahu transits through Leo, Stuart will have to raise the bar for himself. At times he may feel that luck is not favouring him, which is because of the influence of the malefic transits, and he should play with self-confidence, but not over-confidence. All in all, this birthday is going to bring good luck for him, Ganesha feels.

7) He is bound to get fame, and the love of cricket fans all over the world.

Ganesha wishes good luck to the cricketer on his 28th birthday.