Sreesanth to Bounce Back After Eight Years, Horoscope 2021 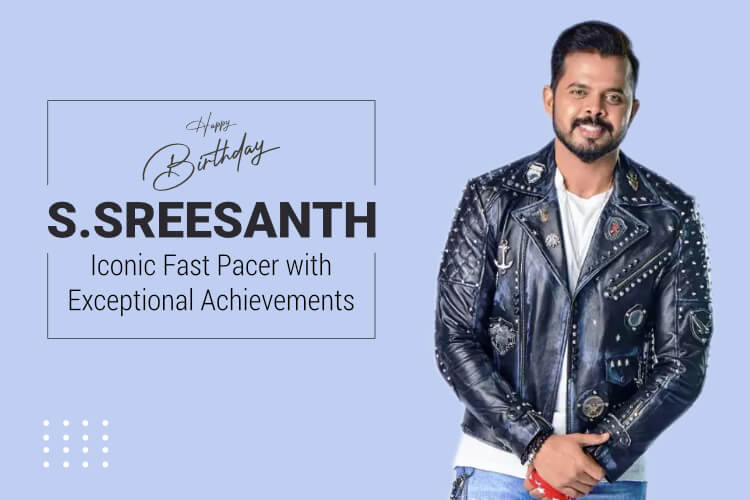 After a long gap of over almost eight years, S Sreesanth will make a stunning comeback to competitive cricket. He will carry out his speciality for Kerala in the forthcoming Syed Mushtaq Ali Trophy. The right-arm pacer got selected in Kerala’s crew for the upcoming T20 competition and will be driving his pace attack upon his return to the game.

Sreesanth got banned for his alleged involvement in the spot-fixing controversy in the IPL. However, he has shown a strong spirit to compel his way back into the state group, and he is by all means back at his blazing best. Ahead of the domestic matches, Sreesanth partook in warm-up matches. Viewed as perhaps the most aggressive and expressive characters on the field, Sreesanth gazed and sledged batsmen during the warm-up fixture also. The 37-year-old cricketer hasn’t changed a touch and bowled at his full pace in the warm-ups.

Check out what Jasprit Bumrah’s stars tell about his success in 2021.

Team India’s ex-fast bowler, S Sreesanth is all set to make his comeback in domestic cricket. Kerala Cricket Association declared Sreesanth would be a piece of its 26-part crew for the Syed Mushtaq Ali Trophy.

BCCI has declared that domestic cricket will restart from 10th January 2021. Sreesanth got the call-up to resume his cricketing career. Earlier, in 2013 Sreesanth was banned from cricket by BCCI on account of his inclusion in spot-fixing. In 2021, Sreesanth will play in Syed Mushtaq Ali Trophy after a gap of almost eight years. It goes without saying planets are associated with the change in the life of natives including the fortune. The same goes for the fast-pacer of India who has more downs than ups in life. And why not, when the conjunction of Sun, Jupiter, and Saturn is helping him to make a cricketing comeback. Once he has made his comeback in cricket, he will struggle to perform well as Moon and Jupiter will combine with Ketu.

From the position of Sun, the transiting Rahu in Taurus is present in the 5th house. This has helped him to make his comeback in cricket. Due to the aspect of Sun and Saturn, the cricketer is again expected to be involved in defamation. The conjunction of planets Moon, Jupiter, and Ketu may result in his poor performance which will further dent his fame. This period will bring him more mental stress.

Check what your ascendant tells about you. Unveil from your Personalised Free Janampatri!

Sreesanth was banned by the BCCI in 2013 and banished from partaking in any competition. In 2019, his ban got abbreviated to 7 years, making him qualified to play in BCCI’s matches, including IPL. While his odds of playing the 2023 World Cup are sombre, Sreesanth can without a doubt make his IPL return if any franchise bids for him.

The following edition of IPL will commence between April and May 2021. During this time, Mars will be present in Gemini alongside Rahu. Therefore, Sreesanth may not play for any of the IPL groups. However, Sreesanth will be on the headlines of every newspaper. From the position of Sun, the natal Jupiter of Scorpio and Rahu are united with transiting Ketu in the 5th house, and the natal Moon of Scorpio sign indicates that Sreesanth will suffer from mental stress. In the year 2021, he will yet again be in controversy because of his unconventional communication skills. He may also use foul language for his fellow cricketers and may indulge in a significant dispute.

Know what the current placement of planets and their combinations impact all areas of life in 2021. Uncover 2021 Horoscope Now!

Will Sreesanth be able to make his comeback a success?

In the coming days, Sreesanth will probably have less possibility of playing domestic cricket as he may fail to solidify his situation in the Syed Mushtaq Ali Vijay Hazare squad Trophy or NKP Salve Deodhar Trophy. This can be conceivable on account of Saturn in Capricorn which may assist him with reestablishing his confidence in cricket. However, it doesn’t imply that Sreesanth will bid farewell to cricket. Well, in 2021 due to the conjunction of Moon, Sun, and Rahu, it will be difficult for him to find a place in the playing XI. And thus, he may not make the cut in the Indian team to play test cricket in 2021.

Will Sreesanth be a part of the upcoming World Cup?

During the World Cup 2023, Sreesanth may buzz around the town, and however, he may not be available to play cricket. In his birth chart, Mars and Venus are placed in Aquarius. Likewise, Saturn is in the Libra sign. Besides, he will be under the Parivartana Yoga of Venus and Saturn, so he may sparkle in the alluring world. Also, this will assist him in acquiring distinction to his name. From 7th April 2021, the transiting Jupiter will pass over Mars and Venus in Aquarius. Hence, Sreesanth may rejoin the entertainment world and may get offers to play various roles in films. Thus, there is a strong probability of Sreesanth not playing in the WC 2023.

A stable financial growth, bumpy ride, or quick success? How will your financial position be in the coming year? Get a Detailed Life Report now!

With everything taken into account, Sreesanth will fail to give his commitment to the world of cricket in 2021. Nonetheless, quite possibly he may show up in films, song albums, or web series shortly.