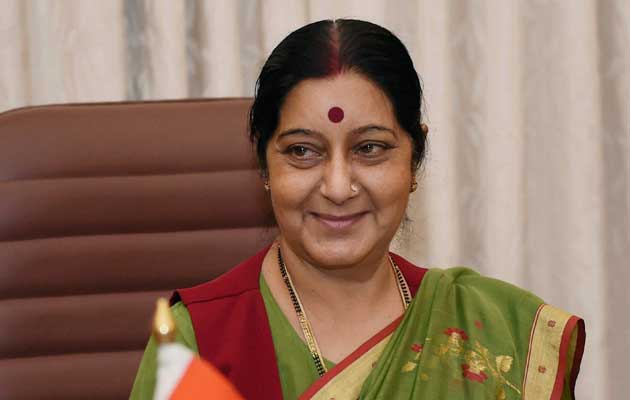 From being a practising Lawyer in the Supreme Court of India, Senior Leader of the Indian nationalist political party- Bharatiya Janata Party(BJP), a Seven time MP and a three time MLA, the only woman to become the youngest Cabinet Minister(Haryana), the Chief Minister of Delhi, Leader of Opposition and Deputy Leader of Opposition in Lok Sabha and Rajya Sabha respectively, Union Minister for I&B and Telecommunications to now being the Minister for External Affairs in the Central Government of India, Sushma Swaraj has had an illustrious and a prominent career. Born on 14 February, 1952 to Hardev Sharma & Shrimati Laxmi Devi, Sushma got her education from Sanatan Dharma College of Kurukshetra University in Ambala Cantonment and earned a Bachelor’s degree with majors in Sanskrit and Political Science. She studied law at Punjab University, Chandigarh. She is married to Swaraj Kaushal, who also happens to be a practising Lawyer in the Supreme Court of India. Always known for her spirited and forthright style of functioning, she has been doing well in her current portfolio. But, unfortunately, the tough 63 year-old is embroiled in a hyped controversy of wrongly helping the controversial architect of the IPL and former Vice-President of the BCCI: Lalit Modi. Experts state that there is nothing wrong in what Swaraj did, but the Opposition parties and Media claim otherwise. So as always, the All-knowing Ganesha takes a deep dive and analyses what’s in store for Sushma Swaraj. Let’s have a look……

Sushma Swaraj is born with Sagittarius Ascendant. Venus being the Lord of the 11th House(Gains and Mass Following) is Vargottama in the Ascendant(Personality). Lord of the ascendant and 4th house, Jupiter is strongly placed in the 4th House, which also happens to be his own house. Lord of the 9th House(fortune), Sun(Political Power) is aspecting the 9th House(Country), being placed in the 3rd House(Courage). The 10th House(Profession and Prestige) Lord, Mercury is placed in 2nd House(Wealth, Talent and Values) and its dispositor Mars is placed in 11th House of Gain. Even Rahu is strongly placed in the 3rd House(Courage and Self-Effort). All these planetary influences are very conducive for her strong leadership qualities and a wonderful political career. She is surely blessed with the political knack and acumen to be an influential and remarkable leader. She possesses excellent administrative capabilities, commanding attitude, bold outlook and is a wonderful orator with a superb command over language.

She is currently passing through the Saturn-Venus-Mercury Dasha cycle. The strong Venus Bhukti bestowed her with grand success in her political career. Her performance as external affairs minister has been impressive throughout the first year of the Modi/NDA Government. She has performed in a forceful, enterprising and a decisive manner. But, the Lalit Modi controversy has put her in embarrassing situation, though experts and veterans claim that she has done nothing wrong. The transiting Rahu is moving closer to the 10th house Cusp. And she has Moon-Saturn conjunction in the 10th house of her natal chart. Due to such a difficult transit of Rahu, her political future suddenly looks shaky. Rahu will create uncertainty and may throw unnecessary spanners in her work. Moreover, the transiting Rahu in Hasta Nakshatra will remain very stressful for her. Adding to this, the forthcoming transit of Rahu in Uttaraphalguni may again bring adverse impact on her political future. Opposition pressure will rise and the episode will continue to frustrate her during the remaining part of the year 2015. However, she will not buckle under the pressure. The transiting Jupiter will be passing through the 9th house from mid July 2015 which may act in her favour. She may be able to manage and negotiate well with the politically tricky and sensitive time which may keep trying to malign her image and undercut her efforts.

Ganesha wishes well for the Senior Politician and hopes that all will be well for her soon.