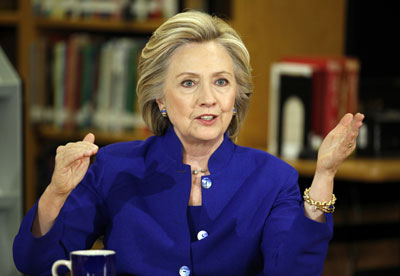 Hillary Diane Rodham Clinton and the term ‘power women’ literally go hand in hand! There are multiple ways in which this charismatic leader can be introduced, out of which some are – the wife of Bill Clinton – the 42nd President of the United States, 67th United States Secretary of State, former United States Senator from New York. Having led an extremely eventful life so far, this smart politician who was born in Chicago, Illinois, has been there, seen a lot and done a lot! Many political observers consider her stint as the First Lady of the USA as one which drew polarized response from the American public. During her stint as the Secretary of State in the Obama administration, “smart power” was viewed by her as a key strategy and some of the prominent views that she endorsed were the combination of military power with diplomacy and American capabilities in economics, technology and other areas. Though she comes across as a very strong contender amongst the other candidates in the run-up to the upcoming presidential elections, there also seem to innumerable challenges which may upset her ride. But will she be able to silence all her critics and crush all obstacles to make it to the top position this November? Only the stars can give us a fair idea. So, let’s find out what lies ahead for her….

Hillary and the Stars…
Hillary Clinton is born in Libra Ascendant and a strong Venus is placed in the Ascendant along with the Sun and Mercury. Venus in the Ascendant lends her great charm, charisma and grace and thus helps in her getting viewed favorably by others. Libra is a cardinal sign, so she is always in action, initiating change wherever she feels right. Also, Libra being an air sign, the changes that she wants to bring are often intellectual in nature. She wants to expand the constructs of the mind and coming with multiple solutions to any problem is generally a part of her thinking process.

The Flipsides:
Some of the planetary alignments in her Chart indicate that one of the hardest things for her is to make a proper decision. When she makes a decision quickly without carefully weighing all the options, then she may make the wrong choice. In general that is not a good sign for any leader or politician. Moreover, she doesn’t like to get pressured; if she feels that is the case, then she may make the wrong move. When she truly wants to come up with the right solution, and if she can’t, then she may tend to get emotionally devastated.

The Power of Saturn as the Yogakaraka:
Yogakaraka Saturn placed exactly over the mid-heaven – the 10th House, looks wonderful and makes her chart significantly strong. She is disciplined and prefers to work out her strategies and policies carefully. The Mars-Saturn conjunction in the 10th house indicates her determination and strong character. It makes her a leader who likes to lead from the front.

Moon in Exchange with Saturn:
In addition to the above mentioned highlights of her Chart, it is to be noted that the Lord of the 10th House of her Horoscope – the Moon is in exchange with a strong Saturn, thus forming an excellent Parivartana Maharajayoga. This configuration gives her endless perseverance. But, it also indicates emotional volatility and she tend to get easily irritated.

The Mars Factor:
Mars is debilitated in the Natal Chart, but exalted in the Navamsa Chart. Its placement with Saturn in the 10th House gives her great drive and ambition, but also signifies repressed anger.

The Email Controversy:
She has Jupiter-Ketu conjunction in the 2nd House. When these two planets are in conjunction, the combined effect of their powers is rather strong and also negative. Jupiter happens to be the Lord of the 3rd House in her Chart which represents written communication and is placed in the 2nd House which represents oral communication. She has faced email controversy and had to face criticism for doing something unethical but not illegal. Even otherwise, it will be wise for to be more careful in her communication and avoid controversies.

Announcement of Presidential Candidature in 2007:
She announced her intent to become a presidential candidate in 2007. She was then under the influence of the Venus-Saturn Mahadasha period and both the planets are highly powerful and well placed in her chart. But, the weakness of Saturn in the D-10 Chart has been creatinga lot of hurdles in her race for the top post in the White House. The transiting Rahu-Ketu had also played their role during the preliminaries and restricted her progress. After a long and gruelling race, she finally withdrew from the Presidential race in June 2008. However, she then became the Secretary of State.

The Current Scenario:
She is currently going through the Sun Mahadasha and Mars Bhukti. Jupiter will be aspecting her Natal Moon in the 5th House in her Natal Chart, till 11th August, 2016. Saturn will be transiting over her Jupiter and Ketu posited in the 2nd House and will be aspecting her Natal Rahu in the 8th House. Ketu will be transiting over her Natal Moon. The transiting Jupiter aspecting the Lord of the 10th House in her Chart may provide great strength to fight against the odds but the impact of Rahu Bhukti from 14th April, 2016 may test her real character particularly between April 2016 and March 2017. Some stressful events and the pressure to take on challenges may strain her nerves in that phase. The challenging conditions created by transiting Mars in Scorpio may force her to take some unconventional and innovative steps to remain in the run for the presidential post. However, she will be empowered in many ways and if she is indeed blessed with the top glory, then she may make for an impressive and powerful American President!

There may be frequent ego clashes and heated interactions with opposition candidates/competitors. However, she stands a good chance to make it big as the Democratic candidate and put up a strong fight to become the US President.