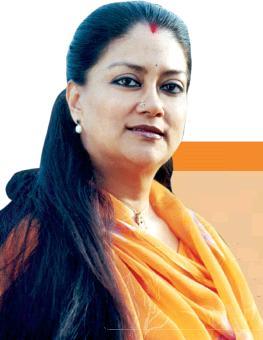 Smt. Vasundhara Raje got elected as MLA from Jhalarpathan(Jhalawar) and assumed office as the first woman Chief Minister of Rajasthan on 8th December, 2003.

She has done her B.A.(Hons) Economics and Political Science from Sophia college, Bombay University. She liked to work as a professional social worker and became member of Sangh Parivar. Hailing from the illustrious Gwalior royal family, she chose to follow the footsteps of her mother and brother and joined the rough and tumble of Indian politics, eventually rising to the highest position of power in Rajasthan. Ganesha sheds more light on Smt. Vasundhara Raje chances of making into the CM’s hot seat, once again, during the upcoming elections.

Rahu in 6th house and Ketu in 12th house in cusp chart.

At present she is under the influence of Mars major period and Rahu sub period.

Astrological analysis for 2008 Rajasthan elections
Ganesha notes during Saturn Major and Sub period, Vasundhara Raje got elected as MLA from Jhalrapathan and assumed office as CM on 8th December 2003.

Ganesha notes that twelfth house Lord Mercury an Avayogi is debilitated and conjoins Mars in ninth house. Rahu occupies seventh house and Lord of seventh Saturn is retrograde in Chitta Star ruled by Mars. She was targeted by opponents for her life style and misfortunes in personal life.

Maharani of Dholpur, Smt. Vasundhara Raje is married to Sri Hemant Singh, and has a son by name Mr. Dushyanth Singh who is an M.P.

Sun is Lord of Dagdha Rasi and occupies eighth house Aquarius an inimical sign. Political analysts scoffed at the projection of Vasundhara as CM material, who was perceived as a socialite more at ease in sharing conversations with elite than understanding common man’s plight.

Ganesha notes being born in Cancer Ascendant made Vasundhara an able administrator and politician. She is credited with having successfully organized “Parivarthan Yatra” and swept the assembly polls by securing 120 M.L.A. seats in the 200 strong Rajasthan assembly. Transit of planets and eclipses of Sun and Moon in July – August 2008, and Saturn transit in Leo has caused disputes with colleagues in the party which led to rebellion and tremendous stress in her life.

Former CM of Rajasthan Ashok Gehlot is soft-spoken and suave person, comes from humble background as a son of magician Lakshman Singh Gehlot. He pursued education to acquire a degree in law. He has one son and one daughter. His natal chart has Nakshatra Parivartana between Mars and Venus.

The chief ministership came as a reward for his painstaking efforts to revive the fortunes of the Congress in 1998 elections during Sun major and Jupiter sub period.

However his policies were not appreciated by powerful communities like Jats and the Congress party had a severe drubbing in 2003 elections under his leadership during Moon major Mars sub period.

At present, he is under the influence of Moon major period and Mercury sub period Venus anthara dasha. Ganesha notes the combination of Jupiter and Moon in the Tenth house. Moon and Venus are debilitated in Navamsh chart. In the natal chart, Saturn is retrograde in Uttarphalguni star ruled by Sun.

On the day of the election, Saturn will be transiting in the same star but not retrograde.

Opposition party Congress led by Sri. Ashok Gehlot will be able to give a tough fight which makes Vasundhara’s task more challenging this time.

Saturn sojourn in Leo may bring disharmony and adversely affect social status in 2009 for Ashok Gehlot.

Ganesha notes Vasundhara faces delays and disputes in realizing her ambitions due to Ketu transit in Cancer on natal Ketu and Saturn’s transit in Leo and shift to Central Government. Ganesha suggests she should find better ways to deal with opponents within the party.

Ganesha notes the transit on 4th December, the day on which elections will be held, Shukla Shashti Tithi on Thursday, position of Moon in the star of Dhanishta ruled by Mars and Saturn in Uttarphalguni Star ruled by Sun. There may be some unruly happenings which may lead to re-elections and to violent incidents some cases.

Moon will be transiting in Revathi star rule by Mercury, Vyathipatha Yoga ruled by Rahu on 8th December, when results will be announced, which are not favourable for Vasundhara Raje.

Considering the astrological factors Ganesha feels Vasundhara Raje and Rajasthan unit of BJP may not be able to retain all the seats. She will have a tough battle on hand and requires all resource skills and strategies to retain the lead.

Hence Ganesha advises her to be more prudent and cautious in her promises and adopt remedial measures, both political and religious, to overcome daunting challenges she has on hands.

What the future holds for Rajasthan?

* Birth time – are as per sources