Don’t be surprised if Narendra Modi becomes Prime Minister in the next 5 years, says Ganesha

The ghosts of the Godhra riots of 2002 still haunt him day and night, and his detractors never miss an opportunity to castigated him as being communal, but Gujarat’s longest-serving Chief Minister Narendra Modi has withstood all the criticism with a stoic calm, and put the state on the express highway to development and prosperity for which he has gained not only national, but even international acclaim. His quick decision-making and progressive policies are attracting entrepreneurs, especially of the automotive industry, from across the world, even as Gujarat, which used to be known as the Manchester of the East, rapidly transforms into the Detroit of the East.

The jury is still out on whether the Chief Minister was guilty of complicity in the 2002 riots, but he is widely perceived as being the next prime ministerial candidate for the BJP in the 2014 Lok Sabha elections. In fact, the 2014 elections are being hyped as a direct contest between Modi and Rahul Gandhi of the Congress party.

Ganesha, with the help of Vedic astrology, predicts that Modi may well become the Prime Minister of the country in the next 5 years. 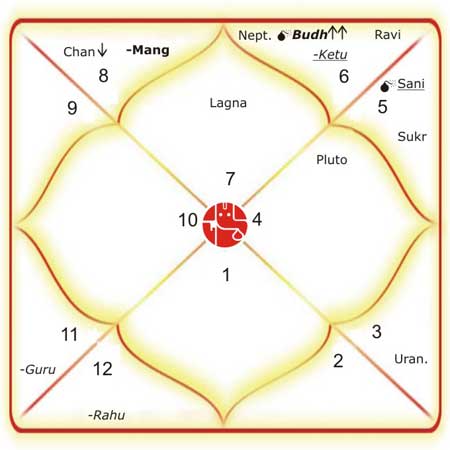 Ganesha observes Gujarat Chief Minister Narendra Modi’s Libra-rising horoscope and notes that Venus is the Ascendant Lord and is conjunct with Yogakaraka Saturn. Rahu is placed in the House of competition and enemies. Sun is conjunct with Ketu and Mercury is in the 12th House. Moon and Mars are in powerful conjunction in the 2nd House.

Rahu is transiting over his Moon and Mars through the 2nd House. This generally signifies several negative effects in routine life. The combination denotes incorrect decisions related to financial management. Besides, unnecessary expenditure is also expected. Mr. Modi is advised to be extra careful, says Ganesha.

Health problems are likely till the end of July 2012, as Ketu transits through the 8th House. There is a powerful yoga of hospitalization between 15th August, 2012, and 15th October, 2012. This is the time when he must give top priority to his health. However, following the remedy (given at the end of this blog) will help him to protect against evil effects of transiting planets, suggests Ganesha.

Transiting Jupiter will be in the 8th House from June 2012. Hence, successful completion of work would require a lot of efforts. The fortune aspect may become weaker during this time. He may even have to face the wrath of the opposition party during the third quarter of 2012, feels Ganesha.

His Sun Mahadasha will finish on 14th August, 2012. This indicates a better phase due to the upcoming Moon Mahadasha. Moon is the Lord of the 10th House of power and dignity. Plus, it is placed in Saturn’s star (Yogakaraka Planet) and Venus’s sub-star. Hence, the period from December 2012 will lay the foundation for new political progress. Positive vibrations of this Mahadasha will help him develop better ideas and policies (Kut-Niti). As Dasha Lord Moon is the cuspal sub-Lord of the 10th House, it will not be surprising if Narendra Modi gets to leads the Union Government in the next 5 years, feels Ganesha.

Finally, Ganesha is of the opinion that the presence of his natal Rahu in the 6th House of victory over enemies will be very much helpful for his political career during 2012.

Remedy:
He should perform ?Maruti Yagna? to ward off the evil effects of the planetary forces, suggests Ganesha.