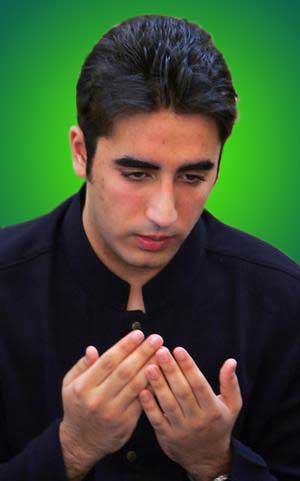 Bilawal Zardari is the chairman of Pakistan Peoples Party and the only son of former Prime Minister of Pakistan Late Benazir Bhutto and her husband Asif Ali Zardari. He was appointed as the chairman of the party on 30th December 2007 after the shocking assassination of his mother. Ganesha throws light on his tenure in politics.

He has Libra Ascendant and the Lord of Ascendant Venus situated near to midheaven is strong. He is shy yet charismatic, very popular and fun loving person. Moon is in Uttarashadha Nakshatra ruled by Sun. So, he is a natural diplomat. For him, saving a relationship has paramount importance. To keep the matters straight, he particularly avoids the use of strong words to others even during the most explosive situations, which is manifested in some of his recent interviews as well. Because of his good diplomatic skills, he is a good mediator in any dispute. Mars in the 6th house makes him a very good athlete and sports fan.

Generally, people born in Uttarashadha have to go through some stress related to their family matters towards the beginning of middle age.

His appointment as PPP chairman

Venus is the Lord of 8th house as well as and placed in the 10th house so he was benefited and got power and authority from the death of someone and in his case unfortunately the person was his mother.

In Siddhamsa 4th lord is exalted. Therefore, he has completed his primary education with ease. The Lord of 9th house Mercury is not well placed in Siddhamsa so he might get problems in completing his higher education. Ketu is placed in the 11th house so mistakes and accidents may bring lack of opportunities to digest his knowledge. Saturn- the Lord of 4th house is also debilitated in the Navmansa. Hence, he might face obstacles and challenges in getting a degree.

The period from May 2008 seems very challenging and eventful for him and he might face severe mental stress between August 2009 and April 2010, as negative events unfolding throughout. There are chances of misunderstanding between him and the others around him mainly his father. May be, his appointment was needed to unite Pakistan but his tenure as a chairman of PPP will be full of thorns.