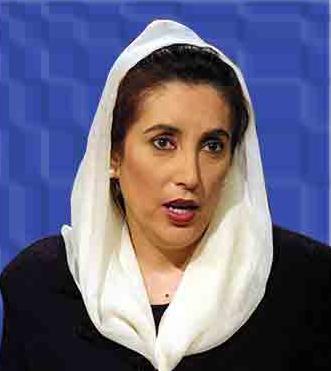 Birth horoscope of Benazir Bhutto is debatable as we have three different dates of her birth:

In first horoscope, Sagittarius Ascendant is rising at 15 degree. She was tall and impressive like all Sagittarius Ascendant people. Such people are very target oriented and highly determined. Ascendant Lord Jupiter is in the sixth house aspecting the 12th house indicating her placement in foreign land for some years of her life. Saturn in the 10th house in Virgo in degreecal conjunction gave her sudden ups and downs in her career. Sun and Mars aspecting the Ascendant makes her stronger but she always had strong rivals throughout her career, which is confirming in this chart. Sagittarius Ascendant and Leo Navmansha makes her Successor of her father in political field (Sign Leo is ruled by Sun and Sun denotes father).

In second horoscope, Libra Ascendant is rising. Here also, Mercury and Ketu are placed in the 10th house of Karma giving instability on the career front but 10th house Lord Moon in the 12th house is much more negative for successful career, which she had and she has always been a strong and popular political figure. Venus at 20 degree in Aries indicates problems in personal life but it’s aspect over the Ascendant makes her presentable. This is the only point confirming in this chart.

The third chart is of zero degree Scorpio Ascendant with Karma Lord Sun in the 8th house of difficulties. Ganesha doesn’t find this chart matching her personality or career.

To find out, which chart can be correct, Ganesha has taken help of various Astrological Tools. Time and place of assassination is accurate so it is the useful factor, can be used effectively here. 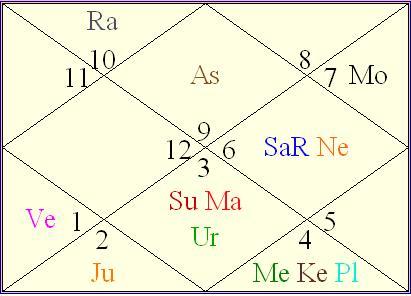 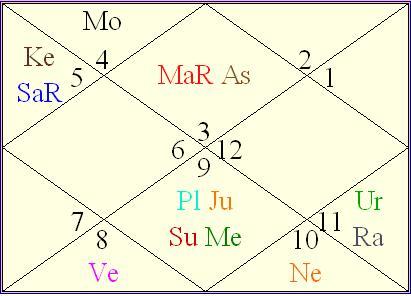 Analysis based on the moment of assassination

Ganesha observes that at the time of assassination, Gemini Ascendant is rising. As per a theory that Ganesha follows, the lowest or negative most time of the day could be when the Ascendant of anyone’s seventh house rises. Gemini is seventh sign from Sagittarius so at the time when she was shot, astrologically she was passing through ‘low phase’. Her Natal Mars is in Gemini in Sagittarius Ascendant horoscope. Transiting Mars was passing through Gemini, through the seventh house of her Natal chart, at the time of death. Although, transiting Jupiter passing through Sagittarius (Ascendant as per the first horoscope) should have saved her but retrograde Mars’ force was probably strong enough to lead her to such a tragic death. It is to be noted that Mars rules weapons and wars both. Transiting Moon was passing through Cancer – the 8th house of death and related matters in her chart.

Analysis based on Tertiary Progression

In her Tertiary Progressed chart based on the Lunar Return that happened on 5th December 2007, Sagittarius Ascendant is rising. This Tetiary horoscope has Rahu in the Ascendant indicating ‘Mystical fear’ and negative forces surrounding her. Moreover, Tertiary Ketu (Moon’s South Node) was exactly at 3 degree of Gemini within 4 degree distance with transiting retrograde Mars in Gemini. Her Natal Sun is at 6 degree of Gemini. If we put these three planets in one line, we observe that her Natal Sun (the giver of life or source of energy for all) is hammed between Mars and Ketu – although one aspect is tertiary and another is transiting, Ganesha finds this one of the important factor for her death. The sign Sagittarius indicates ‘target’. Had Benazir escaped this moment somehow, with transiting Jupiter through Sagittarius, she would have been able to achieve a position in Pakistan. Unfortunately, retrograde Mars and Tertiary Charts negative forces mentioned here, stopped her breath.

Solar Return Based on Birth Location

In the Solar Return chart, Libra Ascendant is rising with Mars in Aries in the seventh house, aspecting the Ascendant representing Native herself. Mars again here indicates ‘Shastra Ghaat’ (danger from weapon).

Attack on her convoy on 18th October 2007 and Mars Return

After Benazir Bhutto’s return from Dubai this year, her convoy was attacked on 18th October 2007. As per Dhan Lagna Chart, Mars is in the seventh house at 11 degree. On the day convoy was attacked transiting Moon was in Sagittarius and transiting Mars in Gemini was in opposition to Moon passing through the Ascendant. This points towards the danger she had from the blast on 18th October 2007. If she was born with Libra Ascendant, Solar Return chart would have been of Leo Ascendant with Ketu in the Ascendant and Moon in Virgo. Mars would be in Aries in 9th house of that chart, which in no way would point towards the fact mentioned here.

Benazir was passing through Saturn major period, sub period of Jupiter and sub sub period of Saturn. Both the planets are in Trine aspect with each other but Saturn is Marakadhipati being second house Lord in Dhanu Lagna so Mahadasha and Pratyantardasha (sub sub period) both were unfavourable for her.

Considering all the points mentioned above, Ganesha feels that Sagittarius Ascendant suits well but Ganesha is still a bit apprehensive about the exact birth time. She might be born with early degrees of Sagittarius Ascendant. Major negative factors surrounding her Natal planets, progressions and transits are the reason for the mishap, feels Ganesha.

May her soul rest in peace.