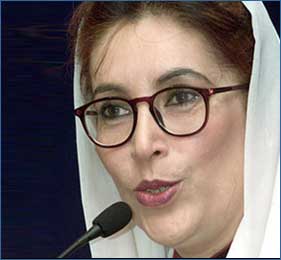 After eight long years of exile, Benazir Bhutto returned to her native country Pakistan today (18th Oct 07). She wowed to restore democracy and to fight religious extremism prevailing in Pakistan. Several corruption cases against her led Bhutto to leave her motherland in 1999. She has been the Prime Minister of Pakistan twice and thus will be given tight security. There are mixed feelings among the masses related to her return. Ganesha observes the planetary positions in her birth chart and gives out reasons for this decision.

Benazir Bhutto is a Pakistani politician who became the first woman to lead a post-colonial Muslim state. She is the twice-elected Prime Minister of Pakistan. She was born on 21st June 1953 in Karachi. She has Gemini Sun sign. Its lord Mercury is situated in the 2nd house from the Sun which indicates that she is highly intelligent with sharp skills required to become a good politician. In 1999, she was under the negative influence of Saturn. Saturn was aspecting the Sun, which is the significator of Government as well as fame and name. Thus she was charged with corruption and faced a number of legal dealings in Pakistan that made her leave Pakistan in 1999. She has also been charged with laundering state-owned money through Swiss banks, in a case that remains before the Swiss courts. Presently, transiting Saturn is moving through the 3rd house which doesn’t aspect Sun. This means current time is favourable for her. Because of that she has arrived in Pakistan’s largest city eight years after she left to avoid corruption charges and lived in self-imposed exile. Her return under the cloud of a threat to her life from pro-Taliban groups has Karachi and much of Pakistan on the edge. In view of next year, next year would be encouraging for her in political field. However, Natal Sun will be aspected by transiting Jupiter which is a positive sign in her favor. This doesn’t mean that each and every problem will be sorted-out. She may face some amount of difficulty but the aspect of Jupiter over the Sun will save her reputation.

May Lord give her the courage to deal with the adverse circumstances! Ganesha wishes all the happiness for her.