Know About Makar Sankranti, Get Unending Joy On This Auspicious Occasion 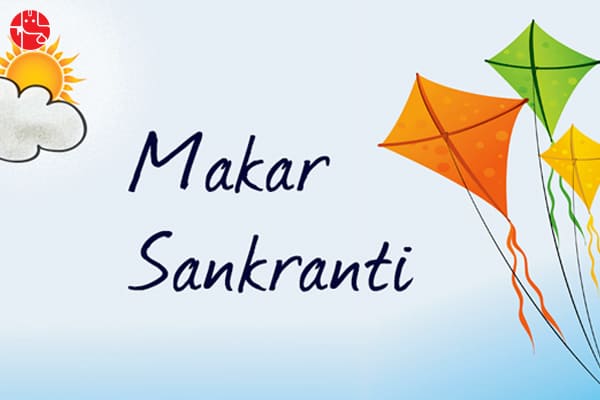 Makar Sankranti has deep spiritual significance and is rooted in an unshakable divine history. Makar Sankranti is a solar event; the date of Makar Sankranti remains constant at, 14 January. It falls around the Lohri festival. In Hinduism, the Sun signifies light (knowledge, spirituality, and wisdom), unity, equality and true selflessness, the ideals of Karma Yoga. Sun goes on bestowing on us life, health & vitality without expecting any reward. Thus Makar Sankranti signifies shunning the darkness of delusion and allowing the light within shine brighter. It identifies a period of enlightenment, peace, prosperity and happiness after a period of darkness, ignorance and viciousness with immense sorrow. The message being ‘one should gradually begin to grow in purity, wisdom, and knowledge, as the sun does from this day and perform ones duties without expectations of rewards.

The name has been derived from the word Sankramana in Sanskrit, meaning “commencement of movement”. Sankranti means transit of Sun from one zodiac sign to other. Makar Sankranti refers to the transition of the Sun from Dhanu rashi (Sagittarius) to Makar rashi (Capricorn and for this purpose, the sidereal zodiac signs are considered, thus accounting for the Earth’s precession of the equinoxes. The significance being from this day onwards, the days start becoming longer and warmer and thus the winter chill declines. Traditionally, this has been one of many harvest days in India. The festival is also referred as Uttarayana as it marks the starting of northward journey of Sun. Many reasons are ascribed in our religious texts like the Puranas for the celebration of this festival, some of which are as mentioned below:

Starting the 14th January, Sun the father visits the house of his son Shani, who is the lord of Makar Rashi. They do not ordinarily get along nicely, but in spite of all the differences, Sun makes it a point to stay with his son at his house, for a month. This symbolises the importance of special relationship between the father and the son. Uttarayana also marks the beginning of the “day” for Devatas, while dakshinayana is said to be the “night” for Devatas, so most of the auspicious things are done during this time. It was on this day when Lord Vishnu ended the terrorism of Asuras by finishing them and burying their heads under the Mandar Mountains. Thus this occasion also represents the end of negativities and beginning of an era of righteous living. Well, you may also improve your financial situation if you avail the Free 2018 Finance Report
It was on this day that the great savior of his ancestors, Bhagirath did tarpana with the Ganges water for his unfortunate ancestors and thereby liberated them from the curse.

Another well-known fact is reference of this day in Mahabharata. Bhishma, the great grandsire of the Kauravas and Pandavas, had declared his intent to leave for the heavenly abode on this day.

Makar Sankranti, is one of the most auspicious days for the Hindus, is celebrated in almost all parts of India in varied cultural forms. Let?s have a look at how it is celebrated across different regions of India.

One of the major festivals of Tamilnadu, it is celebrated over four days. The festivities begin on the last day of the 9th Tamil month of “Maargazhi” and continue till the third day of the 10th Tamil month 0f “Thai“. It marks a new beginning; as, during the month of Maargazhi people abstain from all family celebrations and spend the entire month for devotion. Faith can move mountains. If you have any personal issues in life, buy the Remedial Solutions for Personal Issues and get them sorted.

Tamil Nadu
Day 1 – Bhogi Pandigai (Bhogi)
The first day of festival is Bhogi Pandigai where Pandigai means celebrations. It is celebrated by throwing away and destroying old clothes and materials, by setting them on fire, marking the end of the old and the emergence of the new.

Day 2 – Pongal Pandigai (Also called as Thai Pongal or Sankranti)
The second day of festival is Pongal Pandigai. It is the main day, falling on the first day of the Tamil month “Thai”. On this day the cooking platform is cleaned and decorated. A new bronze pot is filled with fresh milk and kept on the fire. When the milk boils over and bubbles out of the vessel, the tradition is to shout of “Ponggalo Ponggal” and add rice and jaggery to it. Later it is topped with brown sugar, cashew nuts and raisins. This symbolises that it was going to be a year blessed with good tidings. This tradition gives Pongal its name. This rice is offered to the Sun during sunrise along with turmeric, sugarcane, a gesture which symbolises thanks to the sun and nature for providing prosperity. It is later served to the people present in the house for the ceremony. People also prepare savories and sweets such as vadai, murukku, payasam etc.

Day 3 – Maattu Pongal Pandigai
The third day of festival is Maattu Pongal. It is for offering thanks to cattle, as they help farmer in agriculture. On this day the cattle are decorated with paint, flowers and bells. They are allowed to roam free and fed sweet rice and sugar cane. Some people decorate the horns with gold or other metallic covers. In some places, Jallikattu, or taming the wild bull contest, is the main event of this day and this is mostly seen in the villages.

Day 4 – Kaanum Pongal
The fourth day of the festival is Kaanum Pongal (the word kaanum means “to view”). During this day people visit their relatives, friends to enjoy the festive season. This day is a day to thank relatives and friends for their support in the harvest. It started as a farmers festival, called as Uzhavar Thirunaal in Tamil.

Day 1 – Bhogi Panduga (Bhogi)
The first day of festival is Bhogi. At dawn people light up a bonfire with several old articles in their house. In many families they celebrate Bhogi pallu, in the evening. These are the regi pallu with petals of flower and coins of money, will be put on the heads of kids (generally younger than 3 years to get rid of Drishti

Day 2 – Pedda Panduga, Sankranti (Surya)
The second day is Sankranti, the big festival, when everyone wears new clothes and pray to their favourite God by offering them sweets.

Day 4 – Mukkanuma
Mukkanuma is famous among the non-vegetarians of the society. People do not eat any non-vegetarian during the first three days of the festival and eat it only on the day of Mukkanuma.

Karnataka:
Makar Sankranti is marked by men, women and children wearing colorful clothing; visiting near and dear ones; and exchanging pieces of sugarcane, a mixture of fried til, molasses, pieces of dry coconut, peanuts and fried gram. On this auspicious day, people in Karnataka distribute Yellu and bella (Sesame seeds and Jaggery) and greet with the words ” Ellu bella thindu, Olle Maathu Aadu” (Eat sesame seeds and speak only good). The significance of this exchange is that sweetness should prevail in all the dealings.

Cows and bullocks are gaily decorated and fed ‘Pongal’- a sweet preparation of rice. Special prayers are offered. In the evening, the cattle are led out in procession to the beat of drums and music. In the night a bonfire is lit and the animals are made to jump over the fire.

Kerala:
Makar Sankranti is celebrated in Kerala at Sabarimala where the Makar Jyothi is visible followed by the Makar Vilakku celebrations. The 40 days anushthana by the devotees of Ayyappa ends on this day in Sabarimala with a big festival.

Maharashtra:
Maharashtrians celebrate Sankranti by exchanging multi-colored tilguls made from til (sesame seeds) and sugar and til-laddus made from til and jaggery. Since sesame seeds have a greater ability to absorb and emit sattva frequencies, consuming tilgul helps improve spiritual practice. Exchange tilgul amongst one another results in an exchange of sattvic component. Gul-polis are offered for lunch. While exchanging tilguls as tokens of goodwill people greet each other saying ” til-gul ghya, god god bola” meaning “accept these tilguls and speak sweet words”. The under-lying thought in the exchange of tilguls is to forget the past ill-feelings and hostilities and resolve to speak sweetly and remain friends. Women folk invite other married women for a get-together called “Haldi-Kumkum” and given gifts (utensil, clothes, etc.). Typically, women wear black sarees on this occasion.

Goa:
Celebrations in Goa closely resemble that in Maharashtra. The men hardly take part in the celebrations but it is the women folk who celebrate ‘haldi-kumkum’.

Gujarat:
Gujaratis observe Sankrant with a lot of energy and gusto. People offer thousands of their colorful oblations to the Sun in the form of beautiful kites. The act stands as a metaphor for reaching to their beloved God, the one who represents the best. This festival thus helps the maintenance of social relationships within the family, caste and community. Kite flying has been associated with this festival in a big way. It has become an internationally well-known event.

Punjab:
In Punjab where December and January are the coldest months of the year, huge bonfires are lit on the eve of Sankara and are celebrated as Lohri. Sweets, sugarcane and rice are thrown in the bonfires, around which friends and relatives gather together. The following day, which is Sankrant, is celebrated as Magi. The Punjabi’s dance their famous dance Bhangra, and then gather to partake the sumptuous food that is specially prepared for the occasion.

Bundelkhand:
In Bundelkhand and Madhya Pradesh this festival of Sankrant is known by the name “Sakarat” and is celebrated with great pomp & merriment accompanied by a lot of sweets.

Orissa:
Many tribals in our country start their New Year from the day of Sankrant by lighting bonfires, dancing and eating their particular dishes sitting together. The Bhuya tribals of Orissa have their Maghyatra in which small home-made articles are put for sale.

Assam:
The festival is celebrated as Bhogali Bihu in Assam.

West Bengal:
In West Bengal, Sankranti, also known as Pous Sankranti after the Bengali month in which it falls, is celebrated as a harvest festival Pous Parbon. The freshly harvested paddy along with the date palm syrup in the form of Khejurer Gur and Patali is used in the preparation of a variety of traditional Bengali sweets made with rice flour, coconut, milk and khejurer gur and known as Pithey. All sections of society particpate in a three-day begins on the day before Sankranti and ends on the day after. The Goddess Lakshmi is usually worshipped on the day of Sankranti.

Coastal Regions:
In the coastal regions, it is a harvest festival dedicated to Lord Indra.

Fairs:
Many fairs are held on Makar Sankranti the most famous being the Kumbh Mela, held every 12 years at one of four holy locations, namely Haridwar, Prayag (Allahabad), Ujjain and Nashik. The Magh Mela (or mini-Kumbh Mela held annually at Prayag) and the Gangasagar Mela (held at the head of the Ganges River, where it flows into the Bay of Bengal). Millions take a dip in places like Ganga Sagar and Prayag and pray to the Sun God.