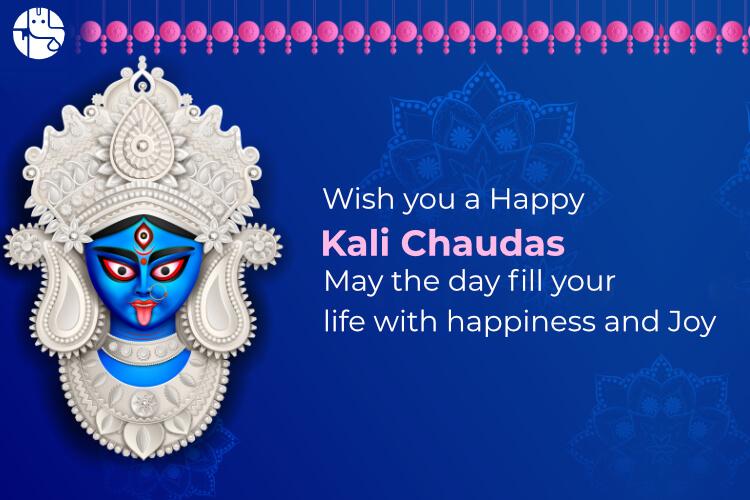 Kali Chaudas is one of the prominent festivals as per the Hindu lore which falls one day before Diwali, the 14th day of the waning moon. Kali Chaudas are the nights that evoke in the voodoo and the sense of occult. It’s a reawakening of the concept of a dark and secretive world of the unknown. The night of the Kali Chaudas is the most dangerous night of the year as the exorcist, and Tantrik uses the same night to perform their black magic.

Kali means (Dark) Evil and Chaudas- Fourteenth. Thus, it is celebrated on the 14th day of Ashwin Diwali. Kali Chaudas is a day allotted to the worshipping of Maha-Kali or Shakti and is believed that on this day Kali killed the Raktavija. Also referred to as Narak Chaturdasi. It is a day to abolish laziness and evil which create hell in our life.

Astrologically, the day is considered to be the significator of the dark areas of life. The worshipping of goddess Kali on this day is believed to alleviate all the negative aspects of our life that may be a result of an ill-placed Rahu. Those who are facing severe troubles due to Rahu should conduct remedies to get away from the malefic effects. If you are facing any problem related to Rahu in your life, then get insights into our personalized Remedial solution for personal issues now!

The stories related to Kali Chaudas

Narkasur was one of the terrible and ferocious Rakshash, the asura sons of goddess Bhudevi and Varaha (Vishnu). With his penance, he had achieved great power on earth as well as on Heaven. Even the powerful god Indra could not save the Earth and Devlok from the assault of a barbaric demon, and thus, he had to flee. Evaluating the situation, he sought the help of all-pervading Lord Vishnu. Lord Vishnu assured that, in his incarnation as Krishna, Narkasur’s end would be brought about. And, indeed in the fierceness of Lord Krishna and Demon Narkaur, Lord Krishna beheaded him with his Sudarshan chakra. Before dying, Narkasur requested for a boon that his death anniversary should be celebrated on earth. And thus, this day is celebrated as ‘Naraka Chaturdasi’.

The others narratives associated with Kali Chaudas

Story of Lord Hanuman and the Sun:

Once Hanuman as a baby was feeling hungry. While laying down on a porch, he saw a bright orange Sun, considered it as a giant juicy mango, he fled to swallow it. As he swallowed the whole Sun, the complete universe covered in a fabric of Darkness. Seeing this, Lord Indra requested him to return the Sun, but he refused to do so. In a rage, he unleashed his vajra and knocked Hanuman down to the ground releasing the Sun.

The tale of Legend Bali:

According to the Hindu folklore, King Bali was the most powerful king on earth. He was considered one of the wise and generous kings of his Kingdom. But once the fame went to his head, he became very arrogant. So, the Lord Vishnu decided to teach him a lesson, and for that, he took his Vaman avatar in the form of Dwarf. When Bali told him to ask whatever he wanted, he asked for a land equal to just three of his leg. With the first step, the Lord measured the whole Earth and the entire Heaven with his second step. Then the Lord asked where to place his last step. A humbled Bali bend down requested the Lord to keep his last one on his head through which he attained salvation. Thus, Kali Chaudas is celebrated on this day.

Kali Chaudas is the most revered festival and Hindu celebrate it with full veneration. It is said that by worshipping goddess Kali on this day she prevents us from all the malefic effects of Shani Dosh. Do you have Shani Dosh in your Kundli now? Check now!

To Get Your Personalized Solutions, Talk To An Astrologer Now! First Consultation with 100% Cashback!