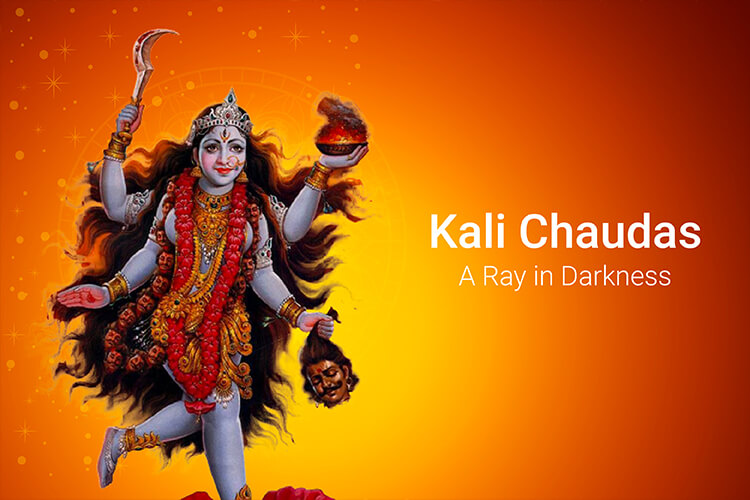 As per the Hindu calendar, the day before Diwali, the 14th day of the dark fortnight of the month of Ashwin (Kartik month according to North Indian belief), is observed as Kali Chaudas, to worship the fierce Goddess Kali. She bestows her devotees with strength and courage to fight evil forces. There are also those who worship the Goddess for blessings of supernatural powers which they misuse to harm other people. Worshipping Kali also protects you from such evil-doers. Kali Chaudas is also known as Narak Chaturdashi, Narak Nivaran Chaturdashi or Roop Chaudas. This year it falls on October 23, 2022. Kali Chaudas usually falls three days before Bhai Dooj and six days before Labh Pancham, which are the other two important festivals during Diwali.

Seeking The Blessings Of Goddess Kali On Kali Chaudas:

On this day, Goddess Parvati is worshipped in the form of Goddess Kali. It is believed that worshipping Kali on this day can lead to gaining many benefits. It primarily includes removing the negative effects of Shani dosh, prosperity in marriage and wealth, recovery from long term diseases, and freedom from the impact of evil spirits.
Goddess Kali is the deity of central importance on Narak Chaturdashi day. The fierce form of Goddess Shakti is known as the destroyer of all the negative aspects and evil elements. She is also known as the face of destruction and regeneration. Seeking her blessings on Kali Chaudas will ensure protection from all negative energies and victory over enemies.

This day which falls on the 14th Day – Chaturdashi of the dark fortnight, is one of the most favourable days for all those connected to the occult fields and having an interest in the esoteric subjects. Moreover, Kali Chaudas or Narak Nivaran Chaturdashi is considered to be the ideal one for Tantriks and Aghoris to perform their rituals and penances. Moreover, this occasion is considered to be most highly conducive for conducting remedies to ward off evil spirits.

In Astrology – planet Rahu is considered to be the significator of the dark areas of life and the worship of the great Goddess Kali is believed to alleviate a lot of negative effects that may be a result of an ill-placed Rahu. Those facing severe troubles due to Rahu should especially conduct remedies to appease the Goddess on Narak Nivaran Chaturdashi. This is the importance of Kali Chaudas.

The Slaying Of Narakasura:

Narakasura was one of the most terrible and ferocious Rakshasas and had achieved great power even on the earth as well in the heavens. Even the powerful Deva king – Indra could not save the Devaloka or Swargaloka from the barbaric demon’s attack, and thus he had to flee. In these situations, all the Devas (Gods) sought the help of the all-pervading Lord Vishnu. The great Lord had assured the Devas that, in his incarnation as Krishna, Narakusara’s end would be brought about. And indeed, a fierce battle between Lord Krishna and the demon ensued and the latter was easily decimated. This killing of the demon is believed to have happened on the Narak Chaturdashi or Roop Chaudas day.

Some Other Legends Associated With Narak Chaturdashi

The Legend Of Hanuman

Everybody knows Lord Hanuman, the beloved devotee of Lord Rama. When Hanuman was just a baby he saw the Sun and thinking it to be a wonderful fruit gobbled it up, throwing the entire world into pitch darkness. On Kali Chaudas day, all the Gods and demi-gods pleaded with Hanuman to release the Sun, but Hanuman did not agree, so Lord Indra attacked him with his thunderbolt, which hit Hanuman on the mouth and the Sun came out, and then there was light again in the world.

The Legend Of Bali

King Bali was one of the most generous kings and gained a lot of fame for it, but the fame went to his head and he became very arrogant. He started insulting and humiliating people who came to him for alms, so Lord Vishnu decided to teach him a lesson and came in the incarnation of Vaman in the guise of a dwarf. When Bali told him to ask whatever he wanted, Lord Vaman asked for land equal to just three steps of his. With the first step the Lord measured the whole earth, and the entire heaven with his second step. Then he asked Bali where to place his third step. A humbled Bali bowed down and requested the Lord to place his last step on his head, which gained him salvation. So Kali Chaudas is celebrated on this day to drive away greed.

The five days long Diwali festivity begins on Dhantrayodashi day and ends on Bhai Dooj. Abhyang Snan has been suggested on three days i.e. on Chaturdashi, Amavasya and Pratipada days during Diwali. Abhyang Snan on the Narak Chaturdashi, is the most significant one. It is believed that people, who do Abhyang Snan on this day, can avoid going to Narak. Til (i.e. sesame) oil should be used for Ubtan during Abhyang Snan.

Abhyang Snan Muhurat on Narak Chaturdashi day is from 5:35 am to 6:42 am

Do’s and Don’ts of Narak Chaturdashi

Goddess Kali offers her devotees protection from innumerable things on Kali Chaudas, such as:

Attract Good Luck With Your Personalised Horoscope On The Auspicious Day Of Kali Chaudas! – Talk To Expert Astrologer Now!