Will the relationship of Brad Pitt and Angelina Jolie sustain the test of time? 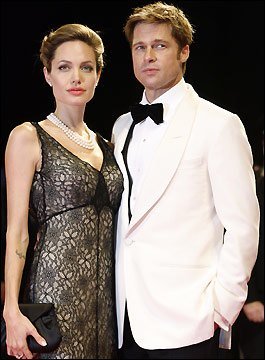 American actor, film producer and social activist, William Bradley “Brad” Pitt, was born on December 18, 1963. Pitt won the Golden Globe Award for the 1995 film ‘Twelve Monkeys’. His marriage with Jennifer Aniston proved ephemeral. The gossip machine was oiled with the rumors of Brad Pitt’s affair with Angelina Jolie, an American film actress and a Goodwill Ambassador for the UN Refugee Agency. It was not uncommon when both of them denied of having any relationship. They proved themselves wrong when Angelina Jolie gave birth to Brad Pitt’s child in May 2006.

The grapevine whispers that they are planning to tie nuptial bonds. With a record of unsuccessful relationships, that they both hold, the chances of a enduring relationship, are lean. Ganesha uses his astrological cognizance to know whether the Jolie-Pitt relationship will be enduring or will it vanish in thin air.

Synastry
Brad Pitt’s Sun sign is Sagittarius and Angelina Jolie is Gemini and Venus and Sun opposite Ascendants. Such aspects give a great deal of attraction. Because Brad’s Mercury is opposite to Angelina’s Saturn, communication between the two is often constrained and frustrating, especially for Brad. With her Mars conjunct his Jupiter, Angelina and Brad spark each other’s ambitions and creativity. He gives her confidence and encouragement to charge ahead.

Angelina’s Sun square Brad’s Uranus guarantees that their relationship is exciting and unpredictable. However, it tends to be explosive too. There is a possibility that they will come together suddenly and break up just as fast. So they have to be careful here.

One of the couple’s biggest challenges has to do with Angelina’s Mars square Brad’s Mars, causing a great deal of feisty energy that can quickly get out of control.

Through their relationship, there is a deepening of their faith. Angelina’s Venus opposite Brad’s Venus ensures that they appreciate and see the beauty in each other.

Current planetary influences
Brad Pitt is currently running Jupiter Mahadasha and Saturn Bhukti which will end on May 12, 2008. Then he will be under the influence of Mercury Bhukti. Mercury the Lord of 11th house is placed with the Lord of 9th house Moon and the transiting Jupiter is moving over the Mercury-Moon conjunction.