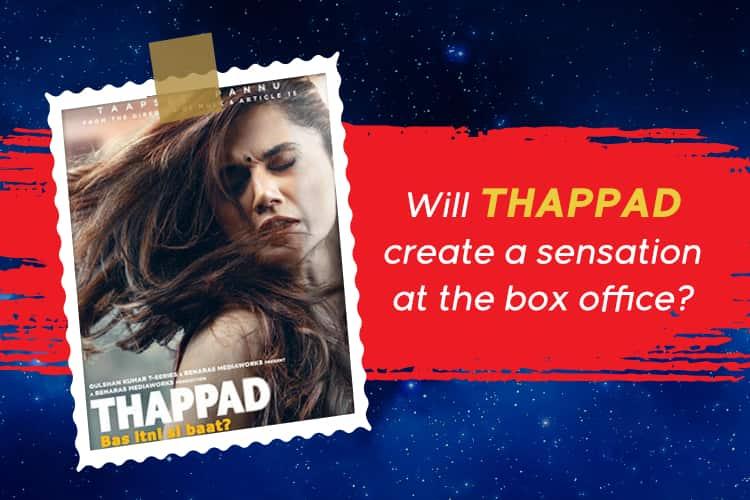 The trailer of the movie 'Thappad' didn't just show a  man slapping a woman, but rather it slapped the taboo on 'divorce' and the tag of a 'divorcee' that women receive. The phrases used in the trailer like ‘sirf ek thappad’, meaning, ‘just one slap’, shows the normalization of domestic violence in society. It puts the limelight on the emotional investments a woman makes in a relationship. It also brings to notice, the endless loop of sacrifices and unfairness, a woman is caught in. The fact that the lead character decides to put an end to her marriage based on that one slap shows just how bold the movie is going to be. The movie challenges society’s perception of divorce and toxic manhood and encourages women’s independence. It will be released this weekend, on the 28th of Feb. On the 18th of Feb, the special screening of the movie took place in Delhi.  Veteran journalist Barkha Dutt who attended it wept through the movie, as it did justice to the sensitivity of domestic violence. She expressed that the movie has raised a loud voice about the sacrifices and oppressed dreams of a woman.

Taapsee Pannu, known for her bold, strong and challenging roles is the female protagonist of the movie. After her inspiring roles in movies like Pink, Naam Shabana, Mulk, Saand Ki Aankh, and many others, she returns with another kickass role in this movie. So, what do the stars have in store for her movie? To answer your curiosity about the weekend box office predictions; Ganesha did the box office predictions for the Thappad movie.

Exalted Venus is placed in the 1st house of self-interest and worldly outlook in the release chart. Ascendant lord Jupiter conjuncts with Ketu and Mars in the 10th house of occupation, honor, fame, and promotion. Hence, these factors show that the movie will create above average mass appeal in India. In fact, the audience and critics both will definitely acknowledge the power pack performances of all the stars. However, it may struggle to enter the 200 Crore Club. Overall, a huge success in India is indicated by the above mentioned planetary situation.

What will be your fate in 2020? Know it by getting your free personalized 2020 report now!

The movie will be released during the Pisces Ascendant with the presence of Jupiter in the 10th house. Thus, lead characters will be highly appreciated in this film. The efforts of the director will also be appreciated. Audience and critics both are surely going to be amazed by the performances.

The respective lords of the 2nd and the 11th house are well placed in this release chart, which predicts that it is going to be a blockbuster as far as financial gains are concerned. The film's fate in India also seems satisfactory and promising to Ganesha. Within Indian territory, it may receive better reach in some states. The 11th house of its horoscope also represents gains through other means. Hence, this film may also accumulate gains or benefits through other means.

Need a friend to listen and an expert to guide you in your life? Feel free to talk to our expert astrologers about any area of your life.