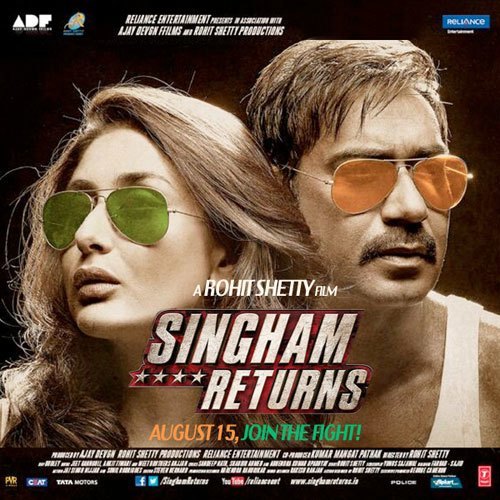 Ajay Devgan’s forceful and winsome performance as Bajirao Singham in Rohit Shetty’s 2011 entertainer Singham is still fresh in the minds of the enthusiastic audiences. The well accepted movie won rave reviews as an out and out entertainer, and is best remembered for its dialogues and excellent dialogue delivery.

Come August 15th and the Indian film audiences have another reason to cheer, besides the Independence Day, for Singham Returns – Singham’s sequel makes its way to the theatres on this day. With Kareena Kapoor in the female lead with Ajay Devgan, the inimitable male lead, the film has created a plenty of curiosity.

Ajay Devgan and Rohit Shetty have been buddies, and their equation has always worked in the past, be it in the Golmaal franchise or Singham. Their magic formula can only take Singham Returns a step ahead! Rohit Shetty revisits the box office after a year, his last film was Chennai Express, a run away hit. All in all, the film Singham Returns is well poised to do well at the box office.

Ganesha, with the help of Vedic Astrology, analyses the film Singham Returns’s Release Time Chart to find out how well this film will do at the box office.

Summarily, Ganesha feels that Singham Returns would surely appeal to the mass audiences. And, its consolidated business in the big pockets, small pockets and overseas market – shall be more than satisfactory.