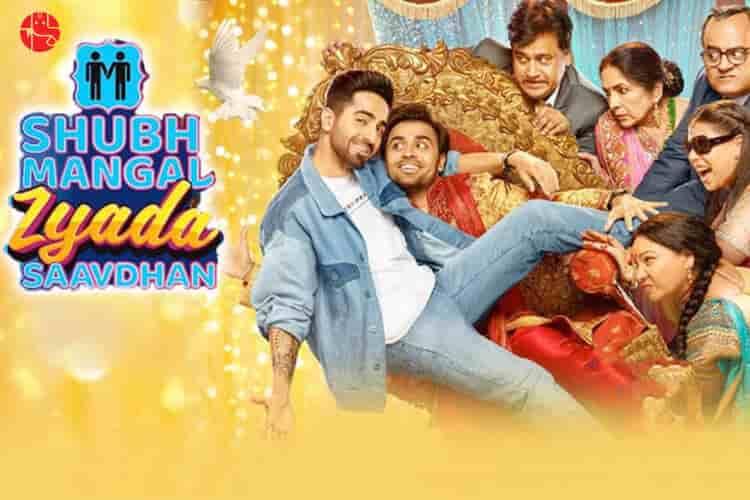 The upcoming comedy-drama movie Shubh Mangal Zyada Saavdhan on February 21, 2020, is a spin-off to the 2017 film Shubh Mangal Saavdhan. Ayushmann Khurrana, Jitendra Kumar, Gajraj Rao, and Neena Gupta are starring in a social romantic comedy-drama film directed by Hitesh Kewalya. The movie promos have become the talk of the town due to back to back blockbusters and unusual roles played by Ayushmaan Khurana. The prediction of movie success has become the buzz from the day its teaser was released. The netizens can’t stop gushing over Ayushmann Khurrana for bringing another unconventional story to the theatres. The actor’s filmography from Vicky Donor, Bala to the upcoming movie Shubh Mangal Zyada Saavdhan, is a testament to the fact that he is the master of playing unconventional roles. The ultimate roadie has worked on taboo-breaking subjects and characters and will continue doing so even in the future. The actor is going to play a gay man whose love interest will be played by Jitendra Kumar.

The movie has recreated in full retro style the famous song Areey Pyaar Kar Le, a foot-tapping number of stylish, dashing, and Jhakkaas actor Anil Kapoor. The movie presents the life of two men who are in love and the story depicts their struggle to convince their family members to let them be together. It is all about how gay partners are fighting the battle of acceptance in society. The special appearance of Bhumi Pednekar and Bappi Lahiri will add charm to the movie. The audience will definitely be rolling on the floor laughing due to the unusual love story.  Will one more unconventional role by Aayushman be a blockbuster? Will the movie break all the past records of Ayushman Khurana? Will the weekend box office collection and the overall collection be able to set a benchmark for 2020? Let’s explore the box office predictions for the ultimate and unusual social comedy-drama movie Shubh Mangal Zyada Saavdhan.

What do the stars indicate about the movie’s fate in India?

The transitory motion of planets creates conjunction of the three major planets, Mars-Jupiter-Ketu in the tenth house, the house of business at the time of release. Also, during this time the Rahu is present in the 4th house, the house of happiness. The influence of  Rahu in the fourth house shows that the entire team might have made a lot of efforts into presenting an unconventional subject in a romantic and comedy way while making the film. On the other hand, the placement of the natal Venus indicates that the movie may successfully present the issue of acceptance of unusual love from the society with comedy and social drama through effective dialogues and punchlines.

How will the reaction of the audience and critics for the movie be?

The placement of Mars-Jupiter-Ketu in the tenth house and Rahu in the 4th house denote fortunate signs to receive good compliments and praises from the audience, film critics, and other film evaluation companies.

The astrological analysis states that the movie will receive success in India. As per the prediction, the weekend box office collection may set a benchmark for the year 2020. So we can expect better performance from the leading cast and mediocre performance from others. Will you be able to set a benchmark for promotion and salary increment in the year 2020? Get insights into career growth from the Detailed 2020 Yearly Free Report?

The placements of Mars-Jupiter in the fiery sign shows that the movie may contain lots of drama, comedy and entertaining punchlines. Hence, the performances of some artists will be appreciated and well accepted by the fans.

Will Ayushmaan Khurrana be able to come up with one more blockbuster? Here is the astrological clue

In the release time chart of Shubh Mangal Zyada Saavdhan, the planetary situation predicts the extraordinary performance of Ayushmaan Khurrana and one more successful blockbuster in his kitty. With Jupiter in the 10th house and Venus in the first house may bless him with its positive vibes in the path of success.

However, the natal Ketu’s placement in the 10th house indicates that the producer and the lead star cast will require some efforts in terms of promotion, advertisements to make the film more successful.

How will the box office collection and the overall business of the movie be?

Various planetary combinations indicate better opportunities to yield money through various sources. However, a stellium of Mars-Ketu-Jupiter in the 10th house further shows some challenges to get a steady collection at the box office in some regions. In which house a powerful stellium of Mars-Ketu-Jupiter striking in your birth chart? Explore it from Free Janam Kundali Analysis.

Overall, it will easily attract the masses especially the youth and make a good box-office collection not only at the weekend but on weekdays as well.