Know How Section 375 Movie Will Perform On Box Office 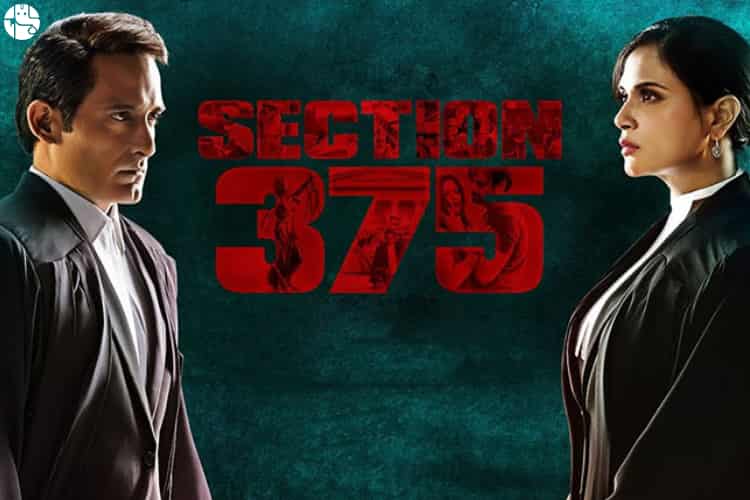 Section 375 movie is a Hindi Bollywood movie based on the courtroom drama. The movie is helmed by the ace director Rahul Bahl and is inspired by real-life incidents. The story revolves around Section 375 of the Indian Penal Code laws, in India. The film is going to release on 13 September 2019 in the cinemas near you. The extremely talented and versatile actor Richa Chadda along with reinvented and consistent star Akshaye Khanna are the main cast and playing pivotal roles in the movie.

The supporting casts of the film are Rahul Bhat, Indian fitness trainer and an actor and Meera Chopra, cousin of well-known actress and an icon Priyanka Chopra. The story is written by Manish Gupta and music is composed by Clinton Cerejo.

The movie addresses a relevant subject which needs to be talked about for the awareness of the people in today’s world. The movie is based on Section 375 of the Indian Penal code in which a woman accuses a man of rape. Section 375 is the important tool in the fight again rape and gender-based violence but few people misuse it and due to them it weakens the fight against the real perpetrators.

In a movie, a celebrated Bollywood director named Rohan Khurana played by Rahul Bhat is accused by a female member of his crew Anjali Dangle played by Meera Chopra of being raped by her boss at his resident.

Movie Prediction by our expert astrologers

How will Section 375 perform?

Ganesha observes that the Lord of the ascendant is placed in the twelfth house that is not a good sign. Since it is making a Neech bhang Rajyog with the lord of the ninth house of luck so it will make some good impression on the hearts of the audience. The film plot is based on some crucial matters of sexual harassment. As there are many movies like this that are released earlier so it does not seem to be going to hit huge response but still able to make an impression on the audience. A social message will be delivered effectively by this movie.

As the lord of Kendra and Trikon are not placed well in the chart on releasing date hence the star cast will perform average. Akshay Khanna and Richa Chaddha will play their role efficiently. While the other cast will give satisfactory support. As the star cast is not so familiar with audience hence they might not attract them much. The dialogues are too straight forward and aggressive due to the influence of Mars. However, the lead star cast will try to bind the audience till the end.

Considering various astrological parameters, we can say the film may get a satisfactory response. The presence of Jupiter in the second house will help to get good box office collection. The opening collection will not be as expected but overall it will give profit to the producer. The presence of the Sun in its own sign in the 11th house will be favourable for getting appreciation from the audience.

Are you finding obstacles in your career growth? Get an astrological report and know which career will give you success, name and fame.