After dominating the television industry for a decade, the queen of soap-operas, Ekta Kapoor is busy experimenting with new formulas to take her creativity to the next level. She successfully entertained her audiences with saas-bahu sagas, and is now taking the silver screen by storm, literally! After bagging a critical acclaim for her films- Love, Sex aur Dhokha and Once Upon A Time In Mumbai, Ekta, with her mother Shobhaa Kapoor, is back with a brand new formula to entertain the audience. Ragini MMS, her upcoming horror film, is based on a sensuous video and paranormal activity happening around it. The film has already gone through its share of controversies with the bold scenes and portrayal of sexuality on screen. The story is based on lines of the Hollywood horror flick, ‘Paranormal Activity’.

Ragini MMS, the story of a haunted house, hidden cameras, a romantic couple and some invisible people will surely make you sit up on the chair. And there cannot be a better day to release a horror flick than Friday, the 13th of May. Will this film feature in the list of ‘Best Hindi Horror Film’ or will it soon be forgotten? Ganesha, with the help of Vedic astrology, finds out. 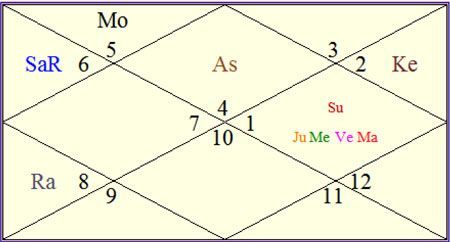 Sarvashtakvarga of the release time chart

Good luck and may Lord Ganesha bless cast and crew of ‘Ragini MMS’.