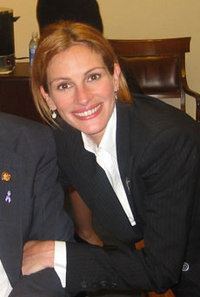 Julia Fiona Roberts was born on October 28, 1967 in Atlanta Junction (GA) (USA). She is an Academy Award-winning American film actress and former fashion model. She shot to fame during the early 1990s after starring in the romantic comedy, Pretty Woman, opposite Richard Gere. Her career includes films such as Pretty Woman, Runaway Bride, and Ocean’s Eleven, which have collectively earned box office receipts well over $2 billion. She won the Best Actress Academy Award in 2001 for her critically praised turn as the title character in Erin Brockovich after two previous nominations during the 1990s.

Julia Roberts has Cancer rising Ascendant with 04 degrees. Moon is in conjunction with Venus and Jupiter in 2nd house. Ketu is in conjunction with Mercury and debilitated Sun. Mars from 6th house is aspecting the retrograde Saturn in 9th house. Roberts has become the highest-paid actress in the world, topping the Hollywood Reporter’s annual power list of top-earning female stars for four consecutive years (2002-2005). An unprecedented $25 million was paid to Roberts for her role in 2003’s Mona Lisa Smile. As of 2007, Roberts’ net worth was estimated around US$140,000,000. During this achievement, she was under the influence of Moon-Jupiter Mahadasha. She is blessed by Moon-Jupiter conjunction in Magha nakshatra. She shall be going more smoothly after November 2007. Lord of 9th house is going to transit over Yogakaraka Mars. This transit of Jupiter usually confers considerable literary skill, intelligent technique. She shall improve more scientific ability and technical expertise. But, Yogakaraka Mars is transiting from 12th house and on the other hand she is also under the influence of Sadesati of Saturn. Overall, she shall have better life after April 2008. Ganesha advises her to give some food to beggars every Saturday evening to avoid malefic effects of Sadesati. On a more mundane level it is probable that, at times, strange financial situations will cause her worry and confusion. This position is favorable for extra-sensory and higher consciousness experiences. You probably possess psychic abilities that may manifest in many levels – astral projection, dreams, healing abilities, etc. These spiritual activities may protect her from transit of Rahu through 8th house.

Ganesha wishes her all the luck for her future endeavors.