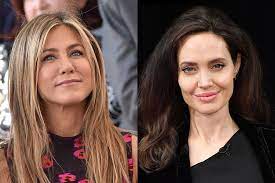 Jennifer Aniston seems to be fighting Angelina Jolie on every possible front of a celebrity face-off that has engulfed the tabloids across the world. This year, Angelina managed to dethrone Jennifer from Forbes’s list of highest paid Hollywood actresses.

The cat claws have barely retracted since 2005, when Hollywood heartthrob Brad Pitt chose Angelina over then wife Jennifer. A heated to and fro followed regarding the Tomb Raider star’s confession that she fell in love with Brad Pitt when he was ‘still married’ to Jen.

The trick to Angelina’s success can be attributed to her balancing act when it comes to pleasing the critics and the audiences. With an Oscar nomination for Changeling to appease the naysayers on the one hand, and Box Office success (read excess!) on the the other in movies like Mr & Mrs Smith ($480 million) and Wanted ($341 million), Angelina pocketed a whooping $27 million between June 2008 and June 2009. This also includes earnings from Salt, her next movie starring Tom Cruise, in which Jolie plays a CIA agent.

Jen found herself licking her paws once again as she came in a close second with an estimated $25 million, two million and a husband short of Angelina. Her earnings include her income from Marley & Me, royalty from the Friends series and Glaceau’s SmartWater endorsement.

Be it beau slink or the bling thing, for some reason, it seems that stars just refuse to side with poor ol’ Jen. With the help of Vedic Astrology System, Ganesha explains why Angelina Jolie has worked her way to the top with the blessing of the stars.

Natal potential of earning as per Samudaay Ashtakvarga
Ashtakvarga is a special branch of astrology upon which scholars like Late Dr BV Raman, Professor PS Shastri, Late CS Patel, CA Subramania Aiyar and Shantilal Dalal have done in-depth research. Ganesha has taken the help of this profound method of Ashtakvarga to explain why Angelina has been raking in the greens.

Here, we observe that Angelina has 90 bindus (auspicious bindus and bindus are the same, and negative points are termed as Rekha) in Sevak. This means that she is a sincere professional. Super star Amitabh Bachchan has 98 binuds in Sevak. It’s no wonder he has a reputation of being one of the most sincere actors in the industry. He is never late for work and is always ready with his make-up and dialogues, much before the shoot begins.

Poshak indicates how much one will be able to earn and Ghaatak indicates the quotient of expenses. Ganesha notes that Angelina has 93 bindus in Poshak and only 76 in Ghaatak, indicating she earns fairly more than she spends.

This factor can be calculated for anyone and will turn out to be pretty accurate in everyone’s case, be it a prince or a pauper.

The effect of Dasha
Angelina is under the influence of a Venus major period and sub-period of Saturn. Venus, Lord of the House of gains, is in Cancer and contains 5 bindus in its own sign in Sarvashtakvarga given below. Venus being the natural beneficial and indicator of wealth, is placed powerfully in Angelina’s chart.

Saturn is in Gemini and contains only 3 bindus, so it is devoid of strength. Saturn is a paap graha or natural malefic planet, so it being devoid of strength in her chart also works in her favour. As Venus is very close to the degree of ascendant, it is likely to keep her happy with money matters and fame through arts, till Venus dasha operates.

Angelina’s days to come
In September 2011, Angelina enters Venus major period and sub-period of Mercury. For about 2 years and 10 months from then, it is likely to be a crucial period for her because Mercury is Lord of the 3rd and 12th House, plus it is posited in the 11th House of gains. In this period, she may have huge expenses too, feels Ganesha.

As long as natal strength of money matters is supporting her, Ganesha feels that she should play a little safe with money and should also start investing before she enters a financially tough period in September 2011.