Introduction: George Michael is a two-time Grammy Award winning pop singer who has had a career as front man of the duo Wham as well as a soul-influenced, solo pop musician. Pop idol George Michael was recently nabbed by cops in a public toilet on suspicion of possession of drugs in Homestead Health area, North London. Earlier he was arrested in 1998 at a public restroom in Beverly Hills for committing a lewd act in front of an undercover police officer. In the light of the above matter, Ganesha tries to analyse Michael's prediliction for committing offenses and predict the future of the troubled pop idol. 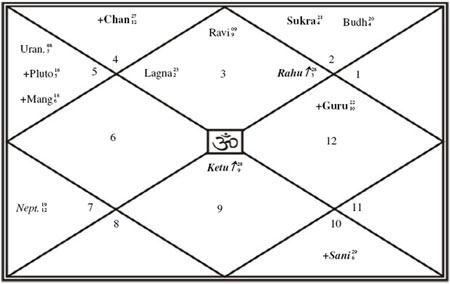 Pop singer George Michael was arrested in public toilets in north London recently. He was taken to a nearby police station where he received a caution for possession of class A and class C drugs.

When we think about drug addictions Neptune strikes our mind straight away. Neptune rules intoxication, alcohol and recreational drugs. In Michael's chart Neptune is placed in the sign of Venus and in the star of Rahu which is indicating that he tends to use drugs to escape his inner loneliness and to detach himself from the outer world. In fact, people with a strong Neptune are often warned to stay away from intoxication as much as possible.

He also has Venus-Mercury in sign Taurus and Venus is in square with Mars. Venus is a planet of pleasure and luxury and Mars' association with Venus represents overindulgence and addiction.

Sun-Rahu conjunction in Gemini makes him self-destructive and secretive. His Uranus, Pluto, Mars in the 3rd house give him tendencies to walk on the wild and dangerous track. It also suggests a fair amount of inner turmoil. And Moon opposition Saturn square Neptune increase the severity and makes his emotional life difficult to handle. He tends to use drugs to get relief from this inner turmoil and loneliness.

The auspicious aspect of the transiting Jupiter on the natal Sun and Rahu might have saved him this time but he will have to be very careful in future to avoid the repetition of such shameful incidents particularly between March and October 2010.