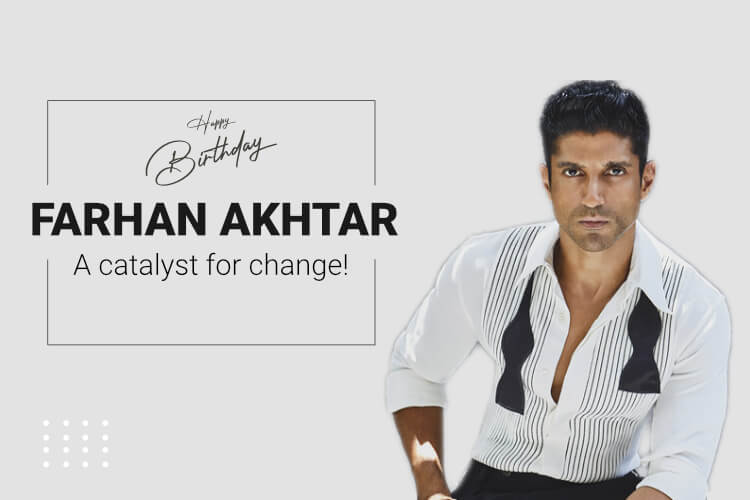 Farhan Akhtar is a gem of Bollywood and a God gifted artist. Needless to say, the planets placed in Farhan’s horoscope have influenced his exceptional talent to sing, write, dance, enact, direct – phew! This has made him quite notable across the globe. He has not only amazed people with his marvellous art of work, but he also became an inspiration for millennials, who entered into Bollywood as a flamboyant brat and made his own fantasy world with his first movie “Dil Chahta Hai”. In the literal sense, his first acting venture with Hrithik Roshan and Abhay Deol in “Zindagi Na Milegi Dobara” was an ode to this first movie (DCH). Farhan Akhtar has not only shown his charm with his charismatic acting skills but also won hearts through his quaint artwork of writing. Not only this, he never backed down from challenges by singing vocally and creatively in different genres of song, adding his taint of colour to his music and winning millions of hearts. No doubt! Why he is truly sensational for the millennial.

Now in a short period, he will turn 47, so let’s find out what is in the store of stars and planets for the year 2021.

Possibilities are endless, thus, find out what planetary movements and conjunctions in 2021 have planned for you by your Handwritten Personalized 2021 Report.

Farhan Akhtar is an Indian film actor, director, screenwriter, singer, producer, and many more. Born on 9th January, Farhan is the native of Capricorn sun sign. Uncovering Farhan Akhtar’s horoscope, the Sun was transiting in Sagittarius sign at the time of his birth. So he is among the ones, who always look for adventure, and thus he has full confidence in himself and always conscious about his image and practice.

How the position of the Sun in your Kundali influences your personality and career prospects? Unveil now from your Personalised Free Janampatri!

Farhan Akhtar, and the Toofani Year!

As per the planetary position of Farhan Akhtar for 2021, the upcoming year seems to be Toofani just as the time of Bhag Milkha Bhag had been. The dual combination of Lagnesh and Finance lord in his chart may create an immense growth in the upcoming year. Jupiter, which is in the tenth house, testifies that 2021 will be the year for his success, as well as the addition of the new milestone to his career. The reward and recognition will be on his way, reveals Farhan Akhtar’s Kundli analysis.

Farhan Akhtar, and the season of new Love!

The year 2021 is looking like a great year for his personal life. The stars in his birth chart indicate that he might be little gravios for his settlement, and even tying the knot with his contemporary girlfriend is also on the cards. This announcement of his settlement can leave the netizen in amaze.

Check out when you will get hitched in 2021 with the 2021 Marriage report.

Farhan Akhtar, and the year of new opportunities!

Kingfisher ultra has chosen Farhan Akhtar as its Brand Ambassador, and if we look at the aspect of Jupiter in his 10th house, this might prove a good opportunity for him. With his zeal and versatile acting prowess, he might be able to reach the heart of millennials. The current transit of Saturn in the second house will prove to be good for him as it will bring lots of amazing opportunities for the coming year.

Remove all the obstacles coming your way and make the best out of the new opportunities in hand, Perform Live Ganesha Puja!

The year is a health concern for Farhan Akhtar

A great personality, Farhan Akhtar is popular for his toned body and transforming his body into different avatars. This year, he might need to be a little careful in matters of his health. The transiting Saturn from his sixth house might create a lot of disturbance over his health during this period. Sudden issues also may arise, thus, avoiding a strict diet is highly advisable.

Ganesha Team Wishes the charming heartthrob of Bollywood, Farhan the happiest birthday ever and success in the year to come. Happy Birthday Farhan!