Will stars help Bangistan open with a bang at the box office? Finds Ganesha… 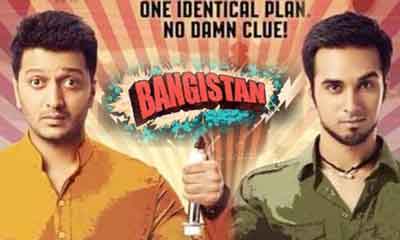 Much talked about comic satire Bangistan, after some delay in release dates, finally makes it to the theatres across India on 31st July 2015. Produced by the celebrated duo Farhan Akhtar and Ritesh Sidhwani, the film based on two terrorists with lofty ideals, stars Riteish Deshmukh and Pulkit Samrat. The movie also features Jacqueline D-Souza (allegedly in a cameo), Kumud Mishra, Arya Babbar and elusive Bengali actor Chandan Roy Sanyal. Film’s novel yet relevant plot, its comic/ dramatic timing, and its fun music, specifically the song ‘Saturday Night’ and its video, have already caught the audiences’ attention. The innovative concept, based on two unlikely terrorists, and meant to convey the message about the futility of violence and terrorism, is said to be whip smart and uproarious. In a time, when the country has recently faced a grievous terrorist attack in Punjab, and also while the whole world has been grappling with the rampant terrorism, this film seems to have brought to fore a very relevant issue. But, will the treatment of the film do justice to this serious problem? Most importantly, will audiences queue up to see the movie? Ganesha checks the box-office barometer, as portended by the stars, for Bangistan – to predict how much this movie is likely to ring the cash registers. Read on!

Ganesha wishes good luck to the cast and crew of ‘Bangistan’.