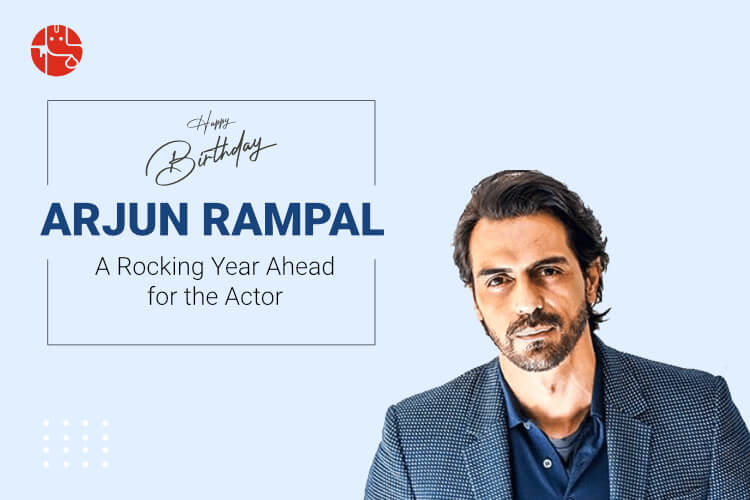 From his modelling days to becoming one of the bankable faces of Bollywood, Arjun Rampal has undergone an interesting journey of ups and downs. For every criticism he has faced, he has always had a performance to show up. Right from the debut in Pyaar Ishq Aur Mohabbat, or career-defining Aankhein, he has been a show stealer with his screen presence. With a career closing to 20 years in the industry, this D-Day actor has solidified his place.

Talking about the future, his movie ‘PSPK 27’ (Telugu) is all set to release by the end of the year. We may also see him in ‘Mughal Road’ in 2021, a delayed-release that has made us wait for long. Moreover, with shooting resumed for Bhima Koregaon, three movies are lined up for him. How will these films perform? Are some challenges waiting for him in his personal life? Let’s find out what astrology predicts for him as he turns 48 on 26th November.

Born on 26th November, Arjun Rampal’s Zodiac sign is Sagittarius. Jupiter will be moving over the planets situated in his 2nd house, the house of values. Transiting Saturn aspects Mars and Venus positioned in the 12th house. The transit of Rahu will take place over the planets in the first house. According to his birth chart, Arjun Rampal will be under the influence of Mahadasha of the Moon and Antardasha of Rahu which ends on 19th December 2021. How will all these transits and planetary positions affect his life in the upcoming year? Let’s find out:

You too can find out about the planetary positions at the time of your birth, and what they are likely to bring to your life with Free Janampatri Analysis.

If everything falls according to the plan, PSPK 27 is all set to release on 18th November 2020, and Mughal Road on 10th October 2021. During this time Arjun will be under the influence of Antardasha/Bhukti of Jupiter which is positioned in its own sign and aspects 10th house, the house of profession. At the time of the release of ‘Mughal Road’, the Antardasha of the Moon will also make its impact. Now, all of these points to one thing: Success. Planets are in favour of Arjun Rampal, as the movies are likely to be remarkable hits across all the regions.

The actor’s portfolio has expanded with changing times, and we have already seen his stellar performance in the web-series ‘Final Call’. In fact, the writing for its second season is already in the process. The Planetary positions and their Dasha in his birth chart indicate immense success for his OTT stints. Not only that, he may make his own path with a different take and content from what we are used to seeing on these platforms. He is also likely to garner praises for his craft that he will showcase in these web-series and short films.

However, like a thorn in a bush of roses, his modelling career may take a backseat during this year, and we may not see him on television soon as well.

On the personal front, Moon positioned in its own sign Cancer will play an important role for them being the lord of the 9th house. This may make a conducive environment for his marriage with his now long-time girlfriend, Gabriella Demetriades. The Instagram favourite couple may get married by February 2021. And even though some resistance can be predicted building around their marriage, life is all likely to be a bowl of cherries, a smooth sailing, thanks to the transit of Jupiter. Similarly, with his son Arik, he is likely to share a favourable period.

His bond with his girlfriend is only likely to improve with time. Outside of that, he may also be able to keep a balance between his past and present relationships. In all his relationships, he is likely to put in sincere efforts and all the deep emotions. Compatibility is the key for a balanced, harmonious relationship. You too can get a better understanding of the future of your relationship with an accurate Compatibility Assessment Reading from our renowned astrologers.

The transit of Rahu and to some extent, Jupiter, is likely to make the road ahead a little bumpy. Despite a harmonious relationship and an expanding filmography, some adversities are likely to disturb him here and there. Ganesha advises him to take on challenges with a cool head in both personal and professional life, and that may indeed help him make the year smooth and safe.

Curious about what 2021 will bring to your life? Find out today, with a 2021 Highlights Report written by our expert astrologers exclusively for you.

Now, there are not many out there who can make 48 look as good as Arjun Rampal. We wish him the same health and double the success for this upcoming year. May we see more of him on the big screen in 2021. Happy Birthday, Arjun Rampal!