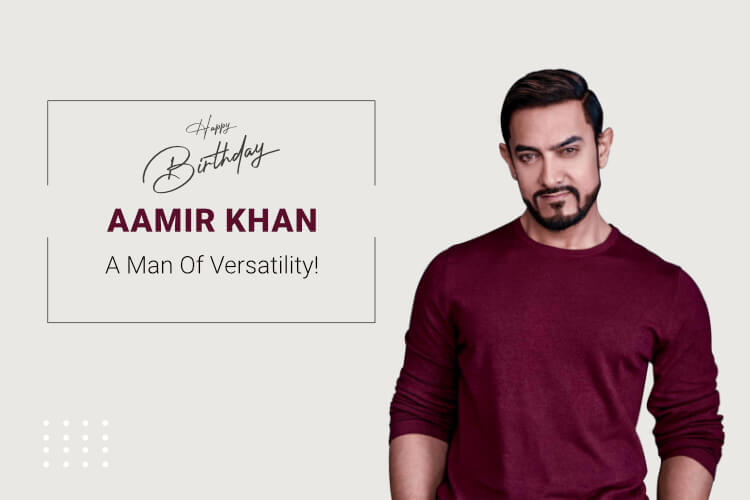 14th March marks the birth anniversary of Bollywood Superstar, Aamir Khan, who is considered a perfectionist and a genius of the Bollywood Industry. Aamir Khan is mostly renowned for experimenting with script, hiss, and role which made him the versatile big fish, a star in himself. In his long-splendid career, this talented and unconventional superstar has given so many eye-catching movies and is still in such a robust position to serve potentially in his own niche. Over the years, Aamir Khan has made us fall in love with his acting prowess and his genius strategy to make the movie worth watching. However, most of his life has been far from the spotlight.

The powerful Khan of the Bollywood industry has always been isolated from the spotlight and shares his thoughts only on the issues that are important. However, still, on many occasions, we believe that we know everything about his life. But it’s not the case as there is some aspect which we aren’t aware of. So let’s know some unknown facts about his life and facts based on his Surya Kundali.

According to Amir Khan’s Surya Kundali, the first house or ascendant belongs to the Aquarius zodiac sign. Moreover, its lord, Saturn is posited in the Shatabhisha Nakshatra, and the Sun is in Purva Bhadrapada Nakshatra of Aquarius. The powerful combination of the Sun and Saturn gave him the sense to choose the right direction and inspired him to perform his best. Furthermore, the Venus of Aquarius is posited in Jupiter’s Nakshatra. This helped the Lagaan actor in sharpening his skill. The auspicious combination of both Venus and Saturn created the inclination for an acting career, and the Mercury retrograde in Pisces is passing through in the 2nd house, bringing hurdles to make progress in his studies.

The aspect of Jupiter in the 2nd house, the House of Gains, and the 11th house, the House of Fortune consolidated the actor’s wealth and made his progress in the economic field. The Moon in the Cancer sign laid the strength to develop maturity in acting. In Amir’s horoscope, Saturn and Mars are strength giver. Also, Ketu in the 10th house is a supporter of his personality. Here, as Saturn aspects Ketu, the actor would face hurdles in his life to progress further after achieving a milestone.

Influences Of Planets In Aamir’s Kundali

As per the transiting planets, currently, Sun, Mars, Venus, and Mercury are in ambush to take upon the natal Sun, Venus, and Saturn in the Aquarius sign. The Moon of Pisces is on natal Mercury. Moreover, the transit of Rahu in Taurus is passing over the natal Rahu. Also, Mars is joining Rahu in Taurus from February 22, 2021. OMG! Ketu is also passing over Ketu in Scorpio. And the last, Jupiter and Saturn are transiting to Capricorn from the 12th house.

Aamir’s Khan New Project and Its Tryst With Jupiter.

According to the position of planets in his Kundali, Aamir Khan’s new project may face some initial challenges. He may undergo some ups and down that might be the reason for his mental stress. However, the support of Jupiter gives him the strength to face the consequences and make him progress in his acting career. As the Moon of 6th house is aspected by Jupiter in Capricorn until 6th April 2021. And then from 14 September 2021 to 20th November 2021, Jupiter will be in Capricorn again to aspect Moon. Thus, Jupiter of the Aquarius sign would pave the way for an actor to boom the box office result.

Planetary transits in Amir Khan’s Horoscope reveals that Vedantu may have some challenging times at first. But the transiting Jupiter in Aquarius through Mars from 6th April 2021 is likely to bring success. However, Jupiter shifting to Capricorn yet again from 14 September 2021 to 20th November 2021 may bring mixed results. Thus we can say that Vedantu, a virtual app, is in safe hands as Jupiter is in the Aquarius sign for the most period in 2021.

Check out which path is made for your success with the 2021 yearly Report.

The Surya Kundali of Aamir Khan indicates that the actor will be consistent in maintaining his health in 2021 as well. Also, the Jupiter in Aquarius and Capricorn may provide an extra layer of protection to his fitness. However, despite all this, Aamir Khan needs to pay attention to his health from 14th May 2021 to 14th June 2021 and from 14th November 2021 to 14th December 2021. As he is likely to have some health-related issues like intestine problems, cholesterol, or High BP. It is advised to take the support of Yoga, Meditation, and Surya Namaskar to remain fit in 2021.

Which fitness habit will suit your body, check out with your Personalised 2021 Yearly Report.

According to his position of Planets, currently, Jupiter in Capricorn is passing over the Moon’s Nakshatra (Shravana) that might increase the list of Aamir Khan competitors and enemies. Moreover, transiting Ketu is slipping over the Natal Ketu. Furthermore, the Sun, the Lord of the 7th house is passing over Natal Saturn, Sun, and Venus. In the coming day, Aamir Khan will be in the major period of Moon and the minor period of Rahu from February 2021 to August 2021. Considering all these situations, there are chances of turning his dream into reality.

We wish this charming and Mr. Perfectionist, a happy birthday and have a fantastic future ahead.