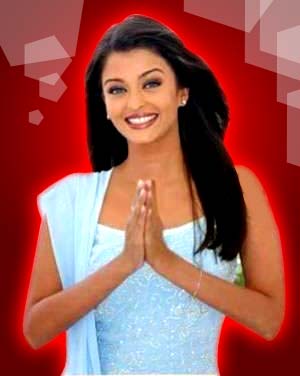 It seems that Aishwarya Rai has got a sudden stroke of luck after marrying Abhishek Bachchan. Jodha Akbar, despite controversies and delay of release in some states, made a very big hit. Now, in Shankar’s movie ‘Robot’ she is being paid 40 million – highest amount a Bollywood heroine would not even dream of getting! She was asked to play topless in this movie and was offered 60 million for the same but she rejected the offer in February 2008. Now in March 2008 she is back in this movie with 40 million and obviously will not be playing topless!

Ganesha would like to throw light on Aishwarya Rai’s horoscope

Ganesha notes that in Aishwarya’s Sarvashtakvarga chart, 11th house of gains occupies 31 Bindus which is more than 25 Bindus of Karma Bhuvan and house of loss (12th house) has 29 Bindus. So, gain through Karma is higher and expense is lesser than the gain. Second house of finance has 34 Bindus which indicates that she will be able to build assets and may also accumulate good wealth.

According to a method, least popular in Sarvashtakvarga, following is the result which may differ from what has been explained above based Sarvashtakvarga’s individual Bhava’s strength.

If Bandhu has more Bindus than Sevak, person is able to do the business and if Sevak has more Bindus person is able to serve others well. Even in Amitabh Bachchan’s horoscope Sevak has higher Bindus than Bandhu. Looking this from Film Industry’s angle, Amitabh is most director’s favourite actor because of his performance and sincerity. Similarly, every good director or producer would want Aishwarya to work in his film because of her beauty. Example of ideal Sevak.

Here, Poshak and Ghaatak Bhavas are getting 82 Bindu’s strength which means that her expenditure may be equal.

Combining both the points together, Ganesha feels that Aishwarya’s horoscope is powerful from financial angle because if we divide total Bindus of Sarvastakvarga (without Langa) 337 by 4, it comes to 84.25. This means that she is closer to the highest Bindus in case of Poshak, so power to magnetize money is definitely there.

Dasha Bhuktis in Aishwarya’s horoscope
She is under the influence of Rahu major period and sub period of Rahu which will rule till 23-02-2010. On 19th of March 2008 Rahu major, Rahu sub and Jupiter sub sub period is getting over. Here is the clue why she had to let go 20 million and accept the deal at 40 million. Jupiter Lord of the sign where Rahu the Dasha Naath is placed is debilitated. Rahu is weak and within 6 degree orb with Venus the second house Lord so this Dasha will give her some difficulties about legal matters related to finance however, she will be able to gather amassing wealth out of the projects that she has been signing.

Aishwarya’s Diurnal Chart for 18thMarch 2008
In Aishwarya’s Diurnal horoscope (As per Vedic Astrology) for 18th March 2008 as per Bombay, Capricorn Ascendant is rising. Diurnal’s second house Lord Saturn is aspecting the second house, which is promising wealth. Diurnal Ascendant is at 14 degree and her Natal Jupiter is at 10 degree of Capricorn thus Ganesha feels that although the news has come in light on 18th March 2008 that she is the highest paid Bollywood Actress, she must have got through deal for this movie ‘Robot’ between 13th and 18th March 2008. As her Natal Chart is powerful and Venus is placed in the second house in the diurnal horoscope with Rahu. Venus is Lord of finance in the Natal chart so obviously powerful and promising good money due to it’s position in the diurnal chart but Rahu is also posited there so amount is unexpected and high!

Aishwarya’s desire to become mother may come to the fore Considering Diurnal horoscope’s Capricorn Ascendant which is Natal 5th house of progeny for Aishwarya Rai, Ganesha feels that she might wish to become a mother very soon however, considering all practicalities she will conceive the child because sign Capricorn indicates
practicality.

Good luck and may Lord Ganesha bless Aishwarya with more lucrative film projects and a wonderful child too!