MS Surface may have a tough time staying on the surface, foresees Ganesha.

Microsoft, the pioneer of today’s revolutionary, fast-changing and pulsating computer industry, recently announced the launch of its own most-recent computer interface gadget – the tablet – named Surface. Its 10.6-inch display, sleek black-glass front, kickstand for tabletop viewing, ultra-thin keyboard case that attaches to the device with a magnet, latest operating system and light weight make MS Surface an attractive gadget to possess. The specifications of this device are such that it’s a PC in the form of a tablet.

However, while Microsoft did create a beautiful picture in front of the world with the announcement of this promising gizmo, certain vital questions were left unanswered. Also, given a decent number of other successful tablet interfaces, including Apple’s i-Pad, already in the market, can MS Surface be dismissed as too late an entrant? Or, will it, with its felicitous promises seriously manage to bring something different on the board? Will Microsoft be able to win consumers hearts and give Apple, its arch rival, a tough fight?

About Electional Astrology
Electional Astrology or Muhurta Shastra is a popular field of Vedic astrology, primarily followed in India. Muhurta Shastra is employed to ascertain an auspicious time to start/ initiate something new. If the Electional Chart of a particular event is not favourable, it is believed that the overall purpose of the work may not be served. Thus, the Fortune Time or Muhurtas are calculated for marriages, launching business, in short, for all new beginnings. 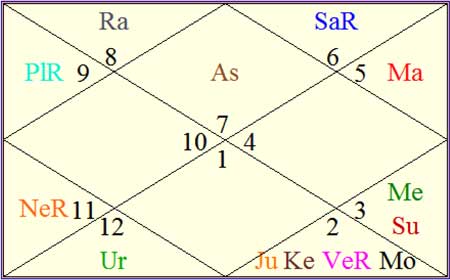 Astrological Picture
From the given event chart, Ganesha observes that the Ascendant Lord Venus is retrograde, and is placed in the 8th House with a strongly malefic Ketu. Moon being the Lord of the 10th House is exalted, but it too is placed in the 8th House. Saturn, the Yoga Karaka planet, is in the 12th House. The retrograde Neptune squares Stellium in Taurus. Rahu is posited in the 2nd House of finances. Swagruhi Mercury (Mercury in its own sign Gemini) is the only visibly positive factor in the given chart. Also, there is a degreecal square between the retrograde Pluto placed in the 3rd House and Uranus placed in the 6th House of this chart.

Analysis
Considering the aforementioned astrological factors, it may be surmised that it’s unlikely that Microsoft Surface Tablet will become a threat, especially in its first stage, to Apple’s i-Pad, the most established and premier player in the tablet category.

It’s undeniable that coming from one of the oldest names in the computer industry – Microsoft, the Surface Tablet will attract and pique the attention and curiosity of many a gizmo freak, but then it’s unlikely that it will be able to shift many loyalists to its side. Hence, i-Pad’s business doesn’t seem to be in for a major challenge from the Surface Tablet.

Besides, Ganesha strongly feels that the Microsoft Surface Tablet shall need some changes and upgrades, before and after the launch. In all probability, it doesn’t look set to be a near-perfect product, right from its first stage.

Microsoft has planned to commercially launch the product in the market around September/ October 2012. However, Ganesha sees a major possibility of this getting further postponed. There is also a strong probability of a new version/ edition coming up after this Surface Tablet. Yet, Microsoft may still not be able to completely beat the already established players, primarily Apple.

Still, Ganesha sees hope for Miscrosoft Surface Tablet, especially with the Tablet’s next/ upgraded (probable, and as predicted) version. However, Ganesha also says that the Tablet may fail to completely woo its target audience in its infancy.