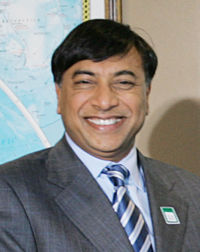 Recently, Laxmi Mittal has decided to set up a refinery in Vishakhapatnam to produce 15 million tonnes of crude annually. He may also bid for oil and gas blocks. Metal King’s entry in Petrochemical field is very interesting. Ganesha explains this move astrologically.

Laxmi Mittal is born on 15th June 1950. Transiting Jupiter is about to enter the opposite position to his Natal Sun from 22nd November 2007. Jupiter, being a big planet in size and hence influential too, has tendency to give result about three month’s back before its entry. Jupiter rules Yellow Liquid. So, astrologically it is the right time that he is entering in Petrochemical field.

After November 22nd 2007 with Jupiter’s transit from the seventh house from his Natal Sun, his search for the partner will get over. He will be able to find suitable partner for the petrochemical business. Ganesha feels that he may involve the partner in the main Body of the newfound company and offer him a responsible position. Mittal is going to benefit through import export and he will also get benefits or favours from the government.

After 1st May 2008 with Ketu’s entry in Cancer, which is a watery sign, he is not likely to have immediate or quick gains out of the petrochemical business but he will have to be patient to see satisfactory gains through the business.

Mittal may face strong opposition from the rival parties by bidding for the deal with ONGC Videsh Ltd., but Mittal has more scopes of winning as stars are in his favour. As transiting Jupiter will be aspecting his Natal Sun after 22nd November 2007, Mittal has scope of receiving special favours from the government, says Ganesha.

In short, Mittal’s stars are shining bright and Ganesha wishes him good luck for the tenure.