Venus In Capricorn: The Amalgamation Of Aphrodite With The CEO 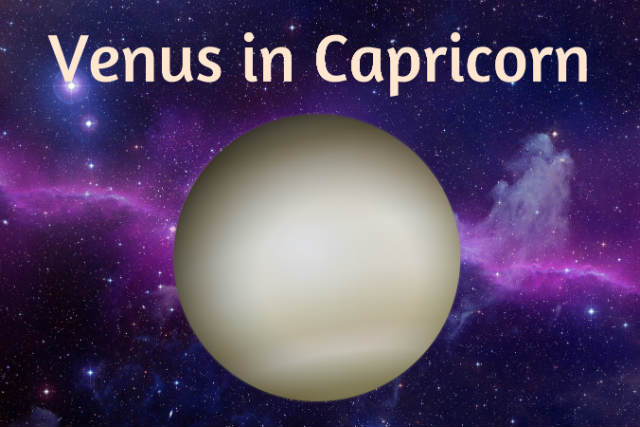 As per Vedic astrology, each planet will transit for a few months or years in a zodiac sign. This will impact the zodiacs differently. Here we are going to discuss the impact of Venus on Capricorn. Astrologically Venus and Capricorn both are different. Venus represents love, beauty, pleasure, luxury, art and entertainment. At the same time, Capricorn is a zodiac sign related to work. They are hard-working sea goats, highly professional, ambitious, disciplined, serious. They are the ones who can work on long projects and will complete well before the deadline. So what happens when a happy go lucky Venus transit Capricorn?

Effect Of Venus In Capricorn: Family And Love

The individual with Venus in Capricorn will treat love and family relationships in a very serious and practical way. Venus is a sign of luxury, but Capricorn will not waste time in flirting or short term fling. Instead, he will want a settled relationship. They are traditional types and feel all the show-off, like going out to clubs, romantic dates; candlelight dinners are just a waste of time. Like work, their relationship is also serious, and it must be official. They do not like hiding it from people. So do not try to run behind a Capricorn if you are not serious. They like to end their relationship with marriage.

How do you tell whether a Venus Capricorn likes you or not? This you can know from their behaviour. Venus in Capricorn will try to win the heart by showing responsible behaviour, accountability and presence of mind. They will let you know that they are witty, aspiring and level headed. However, they are cautious in love.

The male and female of Venus Capricorn radiate the energy of competency, and their savvy behaviour will generally attract the opposite sex. They are not much of an expressive type of love. This may be a reason to complain to their partner. Due to their over practical nature, they lack warmth in their relationship. They seem shy in matters of love, but they are serious about finances. Know how you fare when venus transit in Capricorn. Get a detailed analysis of horoscope done by our astrologers.

Effect of Venus In Capricorn: Career And Finance

They are talented and artistic. They want to have a stable income before they marry. They do not like instability. They are generally economical in matters of money and would like to save finance for difficult times. For them, value for money sits on the top. This makes them discriminate in taste when it comes to luxurious needs like art, music, clothing etc. They have a rich taste in furnishing and clothing. Let us see what happens to the Zodiacs when Venus transits in Capricorn. The Individual with Venus in Capricorn will sometimes act weird. For them, financial security is important, but on the other hand, they are not able to value their work and often end up working for a low salary.

They have this mentality that way to richness and financial stability is through hard work only. They are traditional and do not believe in income through shortcuts. For them, luck is not a way to earn money, and gambling or lotteries are just way too risky. Once they find correct guidance, sooner or later learn to demand the proper wage. Such life-changing situations will enlighten them and motivate them to change their attitude towards money. Astrologically this may happen when the native is around 30 years old, and Saturn returns to its native sign. So holding money before 30 years for them is a little difficult. It is advisable for them to have some savings in a bank account, or else they may feel insecure during tough times. However, they know the art of surviving tough financial conditions but cutting unnecessary spendings.

Rather, they will like to spend on professional courses that may broaden their professional horizon. They believe this will help them get a salary hike or promotion. This actually works for them. They are kind of accumulators and won’t let go of old things. They will rather repair broken old things rather than let them go. They think this might be of some use in future. Know about Capricorn horoscope 2021.

Effects Of Venus In Capricorn: Lifestyle

The Venus in Capricorn traits of an individual is old fashioned and traditional. Rather they are attracted towards wisdom, intellect, loyalty and honesty and expect the same from others while judging them. They want people to judge them for their qualities rather than their looks. They even hate people who like to spend most on luxury items or give importance to looks. This is evident from their lifestyle where they will wear old fashioned clothes or even used clothes of their elder siblings. However, this can often make them the butt of jokes in the friend circle, and there may be difficulty in having a wide friend circle for Venus in Capricorn and often feel rejected by society.

But on the other hand, they have this shrewd money mentality; they will wear old clothes, and this will help in saving money. Once they mature, they start giving importance to the image makeover. They will have this memory flashback as to what they lost due to their shabby dressing style or old fashioned lifestyle. But when they do realise this, they will spend on a rich lifestyle and develop a good taste in fashion.

They often like to be casual and look comfortable in business attire. Often, they will have to wear an official uniform or follow a dress code in their workplace. This actually is good for them as they do not have to worry about being an odd one out. Due to the experiences, they will set fashion statements when they reach the age of 40 and can become fashion gurus.

Regarding their artistic skills, that is underdeveloped in the early stage of their life. They tend to be followers rather than develop their own ideas. Most of their artistic projects may be rejected by society and peers. However, they possess high technical skills but are not able to express their skills. But once the first Saturn return occurs, they will mature and will be able to express themselves and develop their skills, and this will lead them to great heights. They will try to break away from the shackles. The success will be long lasting.

Effects of Venus in Capricorn transit will have varying effects on other zodiac signs. This transit is likely to benefit Taurus, Virgo and Capricorn while the native of Aries, Cancer and Libra may face challenges. The transit of Venus through Capricorn is considered auspicious that might help in making a dream come true. Venus is the planet of love, attraction, desire and luxury, while Capricorn is a practical sign. This is a transit where business meets pleasure, and it indicates the dreams and desire can become a reality. Capricorn is likely to be bitten by the cupid while he is concentrating on his work. However, it is advised that one should not fly too high and be grounded. In order words, they have expectations, but they should be realistic. So the rejection will not hurt you.

Get your Love Horoscope for FREE and explore your love fortunes.