What are the types of Gunas in Kundali Matching? 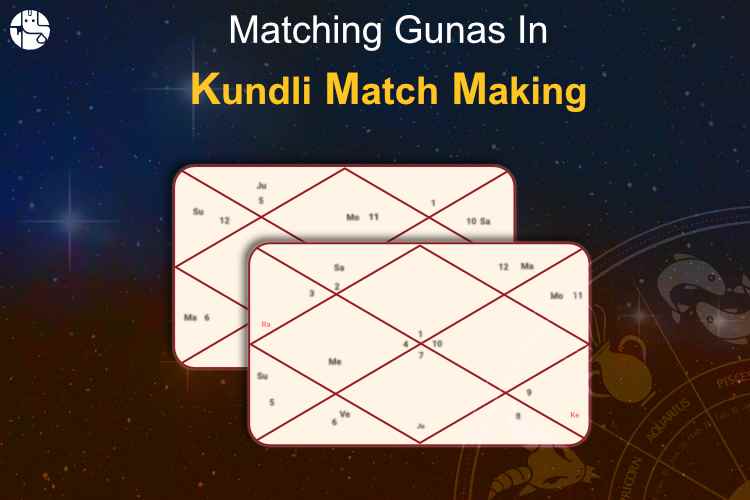 Hindus have been relying on Vedic astrology for decades in almost any aspect of their lives. The horoscope of one person can show the events which are going to take place in their life. And when the decision is about getting hitched, why not ask the stars in your birth chart? It would help you make informed decisions and avoid any future disaster if you are aware of it before-hand.

An expert astrologer can predict the future of a couple including their relationship compatibility, health, and career growth. This way they can also guide one on choosing the right life partner with the help of Vedic astrology. The first and foremost aspect in matching kundalis of a boy and a girl is their gunas. Let’s read about all the gunas and the most essential ones for marriage.

The eight types of Kundali Milan Gunas and meanings of each

A Guna in literal sense means attribute, property or nature. In match-making as per Vedic Astrology, there are eight types of attributes or Gunas that need to be matched or compared between the to-be bride and groom before finalizing their marriage. These are nothing but compatibility tests between both. These eight compatibility tests have their origins from ancient times. They are based on the social norms regarding marriage in the ancient society. It is still an important tool for gauging compatibility in the new millennium. Hence, Kundali Milan is necessary for marriage.

Below are the eight types of Kundli Milan Guna tests:

Vedic astrology has divided the 12 signs in four different castes such as Brahman, Kshatriya, Vaishya, and Shudra.

The four different strata indicate duties, cultural values, and traditions. Hence, this compatibility test indicates the inherent potential and abilities of both the partners to respect family traditions and cultural background.

The five different categories reflect the difference in power status. This compatibility test indicates the power equation between the bride and the groom.

Taara Milan is based on the compatibility of nine categories of birth stars - Janama, Sampat, Vipata, Kshema, Pratyari, Sadhaka, Vadha, Mitra, and Ati-Mitra. The inter-relationship of the birth stars (Taara) indicates the health, well-being, and longevity of the partners after marriage.

Yoni Milan is based on 14 animal characteristics analyzed on the basis of the Janma Nakshatra of a person. It helps to analyze the affinity and biological compatibility of partners as per the behavior and attitude of a person.

It is based on the relationship between the lords of the Moon signs of the bride and the groom. This compatibility test helps to analyze the fundamental difference in daily behavior, mutual trust and faith to each other.

Three separate Ganas (classes) namely Deva Gana, Manav Gana, and Rakshasa Gana have been categorized on the basis of the Nakshatras of the bride and the groom. This compatibility test helps to analyze the respect for each other and bond with each other's family and friends.

It is based on the Moon signs of the bride and the groom. This compatibility test helps to analyze happiness in the family, prosperity of the family and economic status after marriage.

Naadis are categorized on the basis of birth Nakshatras of the bride and the groom. Three categories: Aadi, Madhya and Antya are collectively known as Naadi Milan or Naadi Dosha. This compatibility test helps to analyze the physiological and heredity factor. It also measures the genetic compatibility between the couple to give birth to healthy children and to continue the family lineage.

Get your Kundli Milan horoscope here.

Out of all the above Guna Milan tests, Naadi Dosha Vichar, Bhakoot Vichar, Gana Vichar, Graha Maitri and Yoni Vichar are the most essential parameters in guna matching for marriage. Also, there are some remedies if your gunas do not match.

If the guna types are the same in a boy and girl’s Kundali, it is considered good for their marital life. But, in the case of Naadi Vichar, the Naadi of bride and groom should not be the same.

Read about your marriage horoscope for 2020 here.

Now that you are aware of the compatibility tests of gunas in kundali matching, you can go ahead and get your horoscope checked with our proficient astrologer. With the help of Vedic astrology, you can turn your life into a blessed kingdom and get the best life partner!