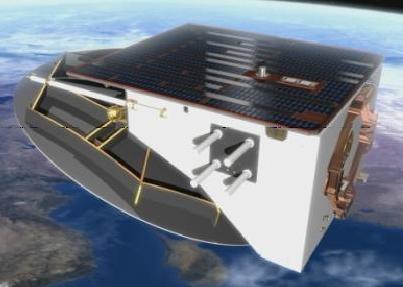 The SAR-Lupe radar reconnaissance spacecraft – the first German military satellite – feature synthetic apperure radar (SAR), will have a spatial resolution of less than 1 meter. Due to the intelligent combination of existing technologies, SAR-Lupe operates independently of weather conditions on a 7/24 basis. It delivers up-to-date and highly detailed images from virtually all regions of the world. Data will be transmitted by an X-band transmitter and encrypted S-band will be used for telemetry and command transmissions both direct to ground stations or via SAR-Lupe inter satellite links. A constellation of five identical satellites in three orbital planes is planned at a cost of + 250 million Euros.

The third of five planned German high-resolution SAR-Lupe radar reconnaissance satellites was successfully launched Nov. 1 by a Russian Cosmos-3M rocket and has begun what is expected to be four weeks of testing before it is transferred to the German armed forces. The 1,587-pound (720-kilogram) satellite, capable of detecting ground objects of less than three feet (one meter) in diameter, will join its two identical predecessors in a near-polar, 310-mile (500-kilometer) orbit. Bremen, Germany-based OHB-System supplied the satellites and the launchers under a contract with the German armed forces that calls for a certain level of SAR-Lupe capacity to be available without interruption for 10 years.

Having look on Germany’s chart, Mars is transiting through Ascendant which is Airy Sign. Lord of Ascendant is also transiting through Airy Sign. Sun, being lord of third house is also transiting Airy Sign. It denotes success in Information Technology, Space craft activities, as well as all observation of heavens. At the time of launching, Mercury and Moon had occupied its own sign which both are significatior of speed. Moon was under aspect of Jupiter. The first two SAR-Lupe spacecraft were launched when Jupiter and Mars were in conjunction in Scorpio. In 2008 it will have successful achievement in launching the two remaining SAR-Lupe spacecraft which are are scheduled to launch at four- or five-month intervals. Ganesha feels that Jupiter with Capricorn may have better improvement in space activities. By late 2009, SAR-Lupe is expected to be available to French defense forces as part of a bilateral exchange that will give the German military access to France’s Helios-2 high-resolution optical reconnaissance satellites. The overall system shall be completed by 2009 to deliver radar images for the German Armed Forces for at least ten years.

Ganesha wishes for success in finishing its remaining projects.