What are the planetary configurations that make Roger Federer a peerless champion? Ganesha analyses.

Calling him a great player of the game of Tennis would be a ridiculous understatement, calling him the King of Tennis would still be somewhat unconvincing. May be calling him the Emperor of the world of Tennis would probably be able to do justice to his astounding greatness and wizardry! Roger Federer – the Swiss Tennis champion is undoubtedly a Living Legend and he is unanimously considered the best player of all time. Commentators, players, spectators and the tennis enthusiasts all over the world can’t resist getting enamoured by his brilliance! Naturally, a Leo that he is and also the Leo Ascendant that he has, he is the brightest and most dazzling amongst the contemporary players of the game of Tennis and he has innumerable awards, credits and honours to his name like – the World No. 1 for a stunning 302 weeks, Winner of 17 Grand Slam titles, Winner of the most number of Grand Slam matches (291), being named the Laureus World Sportsman of the Year for a record four consecutive years (2005–2008) and so on! The list of the achievements of this man is the last thing one would want to prepare, as it seems infinitely long and unendin! Such is the wonder of Roger Federer! Obviously, for a person to accomplish so much in life and that too in such a blazing fashion, there has to be some divine script already in place and there have to be some astrological factors responsible. So, Ganesha gets to the roots and lists out some of the greatest highlights in the horoscope of Roger Federer and explains what are the astrological reasons which can catapult a person to such pinnacles of glory! Read on and immerse yourself in the ocean of astrology and find out some very interesting aspects of astrology… 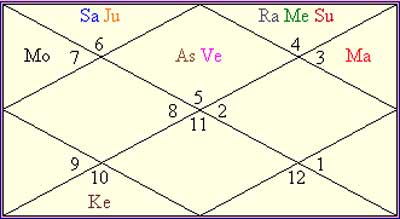 Astrological Analysis of the Highlights of Federer’s Natal Chart:

Ganesha wishes a great time ahead to Roger Federer and wishes him a most happy Birthday.