Domestic problems may bog Satyarthi down in the next few years, feels Ganesha 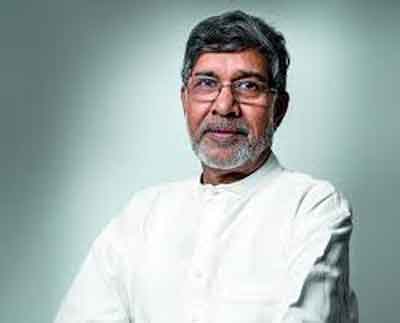 The 2014 Nobel Peace Prize winner, Kailash Satyarthi, has been conferred with the prestigious Humanitarian of the Year 2015 by the Harvard University, in recognition of his continuing contribution to the cause of child rights. The first Indian ever to receive this award, Satyarthi won it for his contributions in the field of child rights and abolition of child slavery. It was on June 16, 2015, that Satyarthi gave a clarion call to global leaders and countries for the elimination of child labour and slavery. Satyarthi was joined by a large number of child right groups and organisations at the Lincoln Memorial where he called for achieving freedom for the world’s children from slavery, labour, abuse, trafficking and illiteracy.

1) Kailash Satyarthi seems to be going through a very progressive phase of his life. What are the planetary configurations working in his favor? Important astrological observations:
Jupiter will be aspecting his Mercury and Venus posited with the Sun in Sagittarius in his Solar Chart till 11th August, 2016.

Ganesha finds that Kailash Satyarthi has been blessed with the exchange of Zodiac Signs which make his Horoscope very strong. Saturn is exalted in the Chart, indicating that he has the magnanimous qualities of serving needy human beings, especially children, not only in India but also abroad. The transiting planets have lent him enough support in his efforts, and also helped him gain fame and popularity all over the world. Venus of his Solar Chart blessed him with this most prestigious award. No one can achieve so much honor without the blessing of Saturn, a spiritual planet, which is exalted in his Chart.

2)What are the Highlights of his Horoscope?
Important astrological observations:

There is exchange of Signs between Jupiter and Venus.

Mars is in its friendly Sign Libra with exalted Saturn. The Sun and Mercury are forming Raj Yoga in Sagittarius, where they are with Venus.

Ganesha feels that Venus has given him the ability of coming up with his creative and unique ideas. Jupiter has given him the support to rise to lofty heights, and Sun has given the sheen to his deeds. Saturn has inspired him to serve humanity, which is equal to spirituality, in such a selfless manner.

3)Will he be able to make a larger impact in the times to come and are there some areas that he needs to be careful about?

Saturn will be transiting over his Sun, Mercury and Venus, post January, 2017 in his Chart.

Jupiter will be transiting through Virgo post 11th August, 2016.

Astrological Predictions:
Health and family issues may pose hurdles in the near future

Ganesha predicts that we should not expect anything more from Kailash Satyarthi in the near future, at least for a few more years. He will have to be careful about his health, post January, 2017. He may remain disturbed because of domestic and family issues. He may find himself distanced from his friends and relatives during the above said period. He may face problems and hindrances in his activities or in the goals he has to accomplish. He may remain dissatisfied with his work environment, post January, 2017.

Ganesha wishes a great time ahead to Kailash Satyarthi .